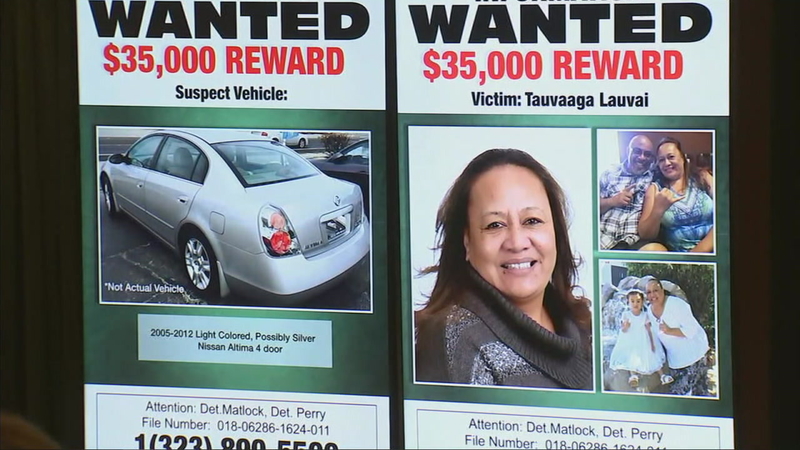 LOS ANGELES (KABC) -- Family members and Los Angeles County sheriff's officials on Friday announced a $35,000 reward for information leading to the arrest of the person responsible for shooting and killing a woman outside of a Carson home during a family gathering in June.

Tauvaaga "Judy" Lauvai, 53, was shot in front of her mother-in-law's home in the 22700 block of Island Avenue at about 9 p.m. on June 16, according to sheriff's officials.

An unknown suspect stopped their vehicle in front of the house and fired shots while Lauvai and her family were gathered there for a celebration. Judy was transported to a local hospital, where she was pronounced dead.

"They were enjoying each other's company," Captain Christopher Bergner of the LASD Homicide Bureau said. "There was no criminal activity going on, nothing that would lend us to believe they were a specific target."

Surveillance video was shown at the press conference where the reward was announced. The footage showed the suspect vehicle, believed to be a 2005-2012 silver Nissan Altima.

Sheriff's officials said Lauvai grew up in Carson and raised her family there before moving to Arizona. She returned to her hometown that weekend to visit family and celebrate an early Father's Day.

"Never would I have imagined trying to keep her alive through CPR, begging her to stay with me," her husband said as he wiped his tears away. "I hope we can come together to bring closure to my granddaughter, my kids and myself. I pray that none of your loved ones become another statistic of senseless violence in our communities."

LASD Sheriff Jim McDonnell and homicide detectives presented a $10,000 reward to the public, sponsored by Supervisor Mark Ridley-Thomas, offered in exchange for information leading to the arrest and conviction of the suspect or suspects responsible for the murder. A second reward of $25,000, sponsored by the city of Carson, was also offered.