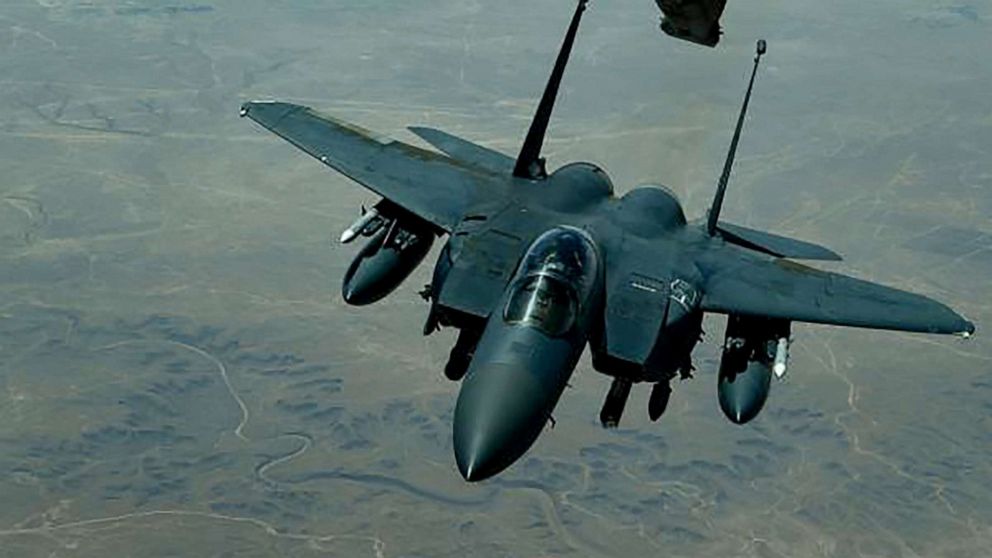 An American F-15 fighter jet came within 1,000 meters of an Iranian civilian airliner flying over southern Syria on Thursday, to carry out a visual identification of the aircraft, the U.S. military confirmed. The visual identification was completed safely, but not before the Mahan Air pilots carried out a rapid descent into Beirut that resulted in several passenger injuries.

"A U.S. F-15 on a routine air mission in the vicinity of the CJTF-OIR At Tanf garrison in Syria conducted a standard visual inspection of a Mahan Air passenger airliner at a safe distance of approximately 1,000 meters from the airliner this evening," said Captain Bill Urban, the spokesman for U.S. Central Command.

"The visual inspection occurred to ensure the safety of coalition personnel at At Tanf garrison," said Urban, describing a remote U.S. military base in southern Syria along the border with Jordan that is home to a small number of American troops.

"Once the F-15 pilot identified the aircraft as a Mahan Air passenger plane, the F-15 safely opened distance from the aircraft," he added. "The professional intercept was conducted in accordance with international standards."

But the F-15's close proximity to the airliner (about a kilometer) seems to have led the civilian Iranian pilots to carry out a rapid and unexpected descent, injuring various on board.

A 55-mile area around the U.S. troops at the At Tanf Garrison is considered a deconfliction zone, where Russian and Syrian government ground forces are not allowed to operate.

The same applies to Russian and Syrian aircrafts -- and any aircraft flying through that airspace -- which must identify themselves via radio.

A U.S. official told ABC News that the F-15 approached the airliner to visually inspect it after it did not respond to their radio communications to identify itself.

Reports of the injuries aboard the airliner first appeared in Iranian state media and originally cited an intercept by Israeli fighters. They later said American fighter jets had "harassed" the civilian pilots, forcing them to carry out abrupt flight maneuvers.

Videos taken aboard the airliner and shared on social media showed what appeared to be a fighter jet, flying at a distance, and then pulling away from the aircraft.

In one video, a passenger described how his forehead was bloodied as the airliner executed its rapid descent. In a clip, another man was seen lying flat in the airliner's back galley as his fellow passengers attended to him.

Steve Ganyard, an ABC News aviation contributor, said the injuries appeared to be the result of an overreaction by the Iranian pilots.

Based on the distance the American jet was from the aircraft, Ganyard said, "The question becomes: What did the Iranian pilots do with their flight controls when they saw the fighter jets?"

Ganyard added that the videos show "a professional, ICAO (International Civil Aviation Organization) standard, visual identification of an unresponsive airliner flying through a combat zone by a fighter aircraft, after which the Mahan flight inexplicably executes a dangerously aggressive descent that apparently injured several passengers."