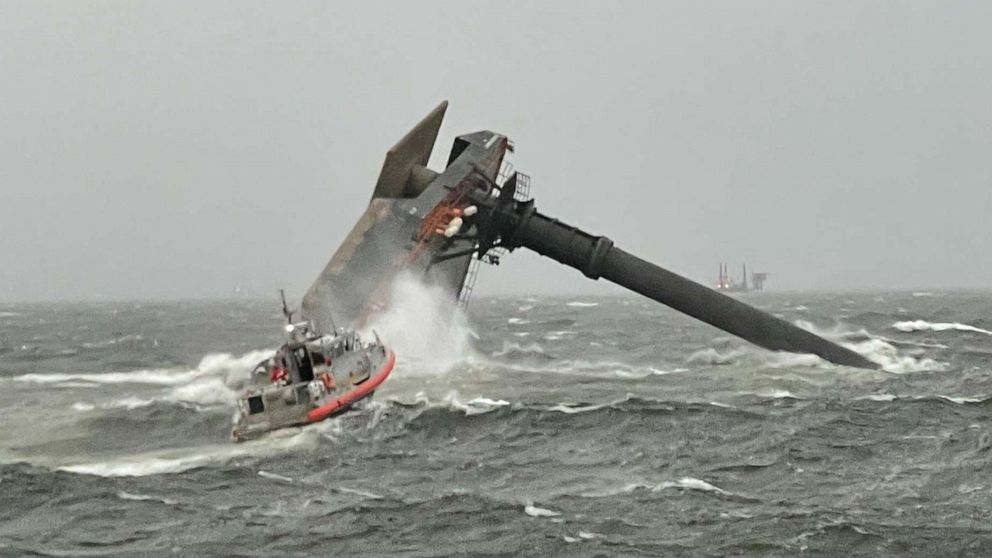 A massive lift boat capsized off the southern coast of Louisiana on Tuesday as severe storms moved through the region, killing one and leaving a dozen on board still missing.

SEACOR Marine, the ship's owner, said there were 19 people -- employees and contractors -- on board at the time the bad weather hit. Initially, officials said they believed 18 people were on board.

One person was found dead on the surface of the water, while six were rescued and 12 others remain missing, Capt. Will Watson from U.S. Coast Guard New Orleans said Wednesday at a press conference.

The 190-foot commercial ship flipped about 7 miles south of Port Fourchon, located about 20 miles west of Grand Isle, where a Coast Guard station is located. The ship was initially identified by the Coast Guard as being 129 feet.

"What we know of the weather conditions at the time, we had 80 to 90 mph winds and 7 to 9 foot seas," Watson said. "That's challenging under any circumstance. We don't know the degree to which that contributed to what happened, but what we do know those are challenges conditions to be out in a maritime environment."

The U.S. Coast Guard and good Samaritan boats responded to the scene, according to USCG Heartland. The Coast Guard received the distress call around 4:30 p.m. local time. Coast Guard officials said they arrived to the spot of the radio beacon with 30 minutes.

One person was rescued by the Coast Guard Cutter Glenn Harris, while another Coast Guard ship from Grand Isle located a second person. The other four people were rescued by good Samaritans, the USCG said.

The vessel remains overturned on its starboard side and is partially submerged and grounded in about 55 feet of water, Watson said Wednesday.

SEACOR Marine confirmed to ABC News that the lift boat involved is the SEACOR Power. It's used in oil and gas exploration.

In addition to the Glenn Harris and two 45-foot ships from Coast Guard station Grand Isle, the Coast Guard Cutter Amberjack, an MH-65 Dolphin helicopter from the USCG station New Orleans and an HC-144 Ocean Sentry airplane from USCG station Corpus Christi were searching for additional people in the water.

Severe storms have swept through southern Louisiana on Tuesday. A flash flood watch and wind advisory were in effect for Grand Isle with the National Weather Service predicting 1 to 2 inches of rain and wind gusts over 50 mph Tuesday night.

The Coast Guard station in Grand Isle, which is about two hours south of New Orleans, had shared several photos of flooding and wind damage just hours before the reports of the capsized ship.