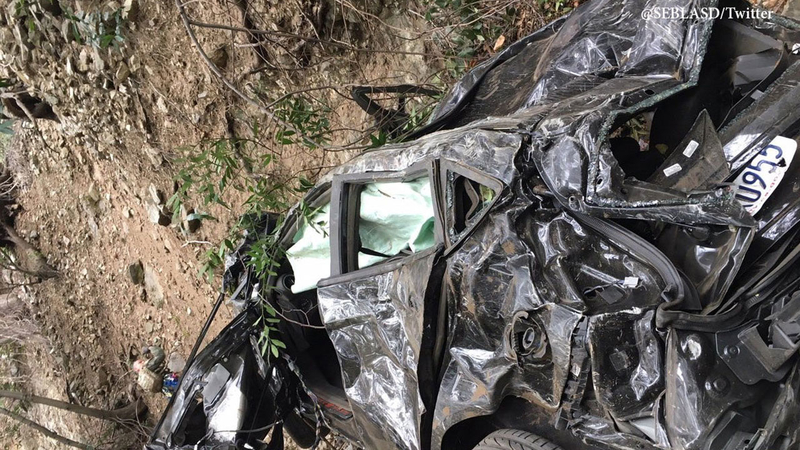 ANGELES NATIONAL FOREST (KABC) -- One person died and two others were injured Sunday morning after a vehicle went over the side of a road the day before in the Angeles National Forest.

Los Angeles County Fire officials said the department received a call around 10 a.m. regarding a vehicle down a cliffside on Glendora Ridge Road. Rescue crews found exactly where the vehicle fell after noticing disturbed dirt and hearing cries for help at the bottom of the cliff.

"That section of dirt was not how it normally is. They pulled the fire engine over, yelled over the hill to see if somebody needed help and they heard someone calling for help," Capt. Brian Jordan said.

The mangled vehicle was found about 900 feet below the road.

Crews said the brush and shrubbery, which was more than 6 feet tall, made it difficult for crews to access the vehicle on top of the incredibly steep conditions.

During the investigation, authorities learned that the driver, identified as Chris Flores, 18, of Montebello, was driving a 2017 Ford Fiesta eastbound on the road at an unknown high speed Saturday night.

Flores was approaching a right curve in the road but because he was traveling at an unsafe speed he ended up sending the vehicle over the cliff. One of his passengers, an 18-year-old man also from Montebello, died in the crash.

Flores and another passenger, identified as 18-year-old Zoe Ybarra, of Los Angeles, were the survivors who sustained major injuries.

The identity of the deceased man was withheld pending notification of next of kin.

Authorities said alcohol and drugs are not suspected factors in the crash. They were also unsure when exactly the vehicle crashed on Saturday.

It was unclear if Flores will face any charges for the fatal crash.