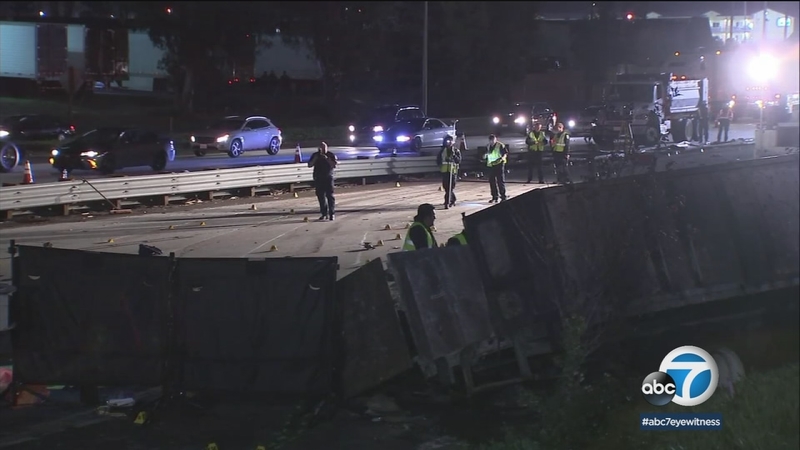 RIALTO, Calif. (KABC) -- At least five people were killed in fiery crash involving a truck that barreled through the center divider in Rialto, which shut down both sides of the 10 Freeway.

The eastbound side of the freeway was expected to remain closed at least until early Saturday morning as crews worked to clean up the wreckage and assess damage to the roadway.

Three other vehicles, a motorcycle and a truck were also involved in the collision. Authorities said at least five people were killed.

The concrete pumping truck lost control while on the westbound side of the freeway, then crashed through the center divider and right into oncoming traffic on the eastbound side.

After the crash, the truck was seen on its side, consumed in flames. Firefighters knocked down the blaze after a short time. The driver of the truck was hospitalized with non-life-threatening injuries.

Witnesses captured photos and videos of the big rig and other vehicles on fire.

The California Highway Patrol said the freeway lanes on the westbound side were closed for a few hours, but then two lanes reopened by 6 p.m. The eastbound side was expected to be closed until possibly 3 a.m. Saturday.

At one point, drivers were trying to avoid the traffic standstill by driving through a sandy area off the side of the freeway, but many drivers in smaller cars ended up stuck.