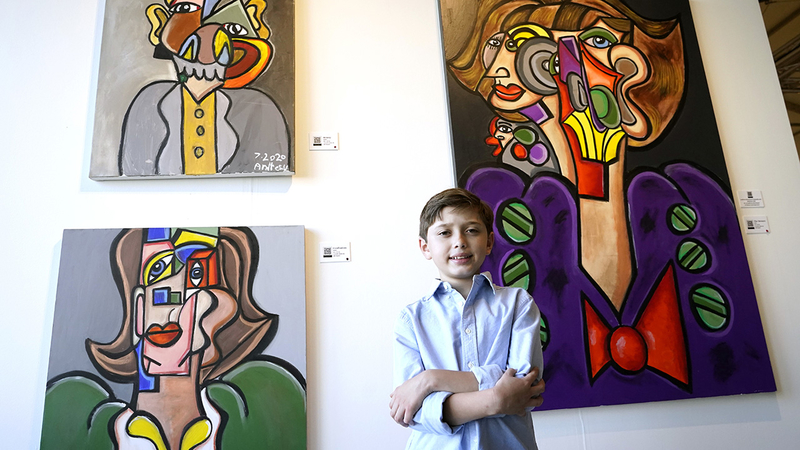 MIAMI -- Miami Art Week draws in celebrities, collectors and the most talented artists from around the world -- including 10-year-old Andres Valencia.

The child artist's gallery sold out at Art Miami, his first show.

The San Diego-based painter simply saw a film about American artist Jean-Michel Basquiat and told his parents, "I can do that."

"It's self-taught," said Elsa Valencia, the boy's mother. "Sometimes I ask him, 'Why? Why the why the cigarette?' And he said, 'Why not?' He said, 'George Condo uses cigarettes on some of his paintings.'"

At the start of the COVID-19 pandemic, his parents gave him large canvases to pass the time, and he honed in his skills.

Actress Sophia Vergara bought one of his pieces this week and Channing Tatum, Jordan Belfort, and artist Shepard Fairey stopped by his booth at the Art Miami fair to check out his work, according to a spokesperson for Chase Contemporary.

Proceeds from Valencia's works are going to the Perry J. Cohen Foundation, which supports the arts, and environmental and wildlife education and preservation.

"He's really a prodigy. He really is," said Pamela Cohen, president of the foundation. "What touches me the most is at 10 years old, not only being a great artist, he's also donating a portion of the proceeds of the artwork ... so he's a philanthropist also."

The young contemporary artist has a message for painters of all ages: "To keep trying and to not stop."