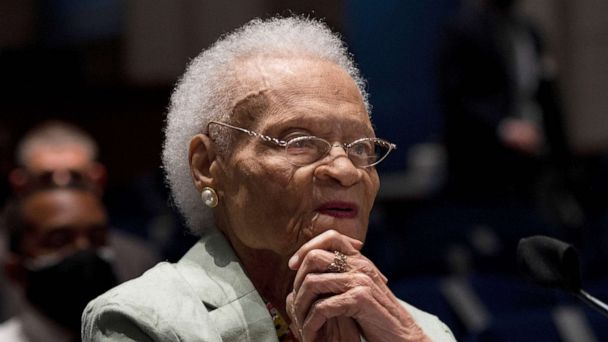 More than 100 years after the Tulsa Race Massacre, survivors and their descendants are still seeking justice in court for the atrocities committed against a once-thriving Black community.

In 1921, a mob of white vigilantes eviscerated Tulsa's Greenwood neighborhood, known at the time as "Black Wall Street" due to its affluence and successful business enterprises. The racist violence killed at least 300 people, wounded thousands and destroyed some 35 acres of commercial and residential property.


"This lawsuit seeks to get justice and repair for the 1921 Tulsa Race Massacre and the 100 years of continuing harm," attorney Damario Solomon-Simmons, who is representing the plaintiffs, told ABC News. "What we say in a lawsuit, and what we believe we can prove, is that the massacre created what's called a public nuisance, and that nuisance has continued unabated, meaning has not been fixed, or repaired, since it was instituted."

Three living survivors of the horror -- Lessie Benningfield Randle, Viola Fletcher and Hughes Van Ellis -- appeared in a Tulsa courtroom on Tuesday as Solomon-Simmons argued for the case, seeking acknowledgment and accountability from the city and local government. The fate of the suit is now in the hands of District Judge Caroline Wall, who is set to rule on whether it can proceed.

"They were there the whole time all through," Solomon-Simmons told ABC News on Wednesday of the three centenarians. "They are lucid. They are strong. They're inspirational, and we feel like they deserve this day in court, when others have died without justice. So we are so inspired and motivated to get them justice before it's too late."

Solomon-Simmons called the hearing "historic," as it comes after more than a century of efforts from survivors.

The attorney added that for the court to declare and acknowledge that this massacre occurred and has continued to cause harm "can provide so much of a sense of healing."

"When you have survivors who experienced murder, saw looting, their community being burnt down, literally had to run for the lives and run out of town," he said, "and then the same entities who created that harm refuse to accept responsibility, refuse to even acknowledge that they did what actually occurred, that continues trauma, that continues the harm to those survivors."


"Just getting the court to recognize, by law, these people did this worst act of domestic terrorism in the history of this nation, starts to heal it," he added. "And then if these people are ordered to abate or fix the problem, to stop the nuisance, then and only then can this community and those impacted by the massacre be made whole."

Fletcher, one of the survivors of the massacre, testified in front of a congressional committee in May, saying, "I still see Black men being shot, Black bodies lying in the street. I still smell smoke and see fire."

"I still see Black businesses being burned. I still hear airplanes flying overhead. I hear the screams. I have lived through the massacre every day," Fletcher, who was 7 at the time, added. "Our country may forget this history, but I cannot. I will not, and other survivors do not. And our descendants do not."

A Tulsa city spokesperson declined ABC News' request for comment Wednesday, citing the ongoing litigation. The city has argued in court filings that, among other things, too much time has passed since the claims in the suit were made.