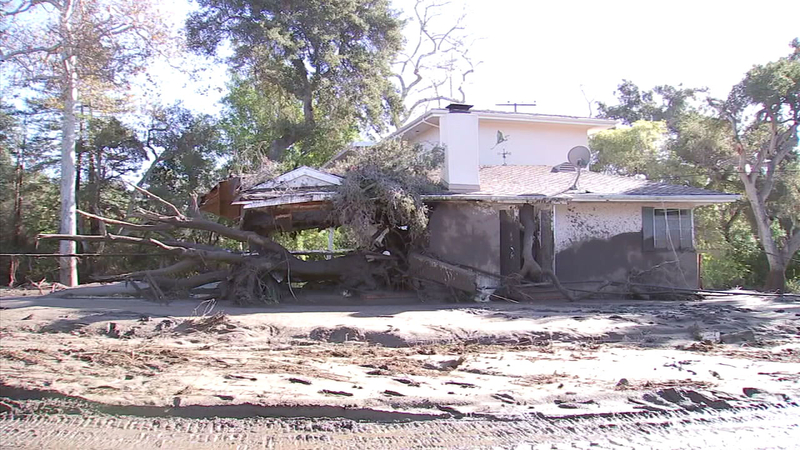 MONTECITO, Calif. (KABC) -- The death toll in weather-related incidents in Santa Barbara County has risen to 17 by Wednesday, after a storm led to dangerous mudflows that destroyed 100 homes and damaged at least 300 others in wildfire burn areas.

Santa Barbara County Fire Department officials confirmed the number of fatalities rose from 13 to 15 overnight. Then another two deaths were added to the toll in an afternoon press conference.

The fatality figure could increase as at least 17 people were considered still missing as search-and-rescue efforts continued.

More than 500 first responders and 10 search dogs were involved in the search-and-rescue efforts. Three people were rescued on Wednesday. Searchers believe they have looked through about 75 percent of the debris field.

In addition to the fatalities, 28 people were reported to be injured. About 100 homes were destroyed and 300 others were damaged, according to Santa Barbara County fire officials.

The massive mudflow in Montecito tossed cars around like toys.

Overnight, crews were scrambling to get to some of the worst areas, looking for residents who may be trapped inside their homes. Workers were also attempting to clear as many roads as possible from the slippery muck to make it easier for rescue crews to move around.

In the Romero Canyon area, about 300 to 400 people had to be evacuated, with no access to water or power. That evacuation was complete by Wednesday afternoon.

Some residents were allowed to stay home if they preferred because there was no immediate danger but those who chose to leave were airlifted to safety or, as roads were cleared later, on the ground.

Montecito was also facing challenges with its water supply.

The city issued notices to residents to boil their water before drinking. The notices were issued as a precaution and not because of any specific evidence of contamination, according to Nick Turner, general manager of the Montecito Water District. He said the boil notices will remain in place until complete testing of the water supply can be completed.

Some residents in the Upper Toro Canyon area and along upper parts of the water district's boundary were without water on Wednesday, he said.

The city had to reduce its supplies of water from certain lakes and reservoirs because of main breaks, he added.

It was expected to be another long day for rescuers and residents as they try to get through recovery efforts.

Powerful mudslides destroyed homes in the area on Tuesday as rescue crews rushed to search the rubble and mud, which was reported to be 5 feet deep in places.

Santa Barbara County firefighters had dogs picking through the muddy remains of homes, looking for any others who may have been trapped. Fire officials said there was 50 air-hoist rescues, and dozens upon dozens of ground rescues.

It remained in place Wednesday and was expected to remain closed at least through mid-day Monday, the CHP said.

Elsewhere in the Thomas Fire's massive burn area, Route 33 was shut down north of Ojai between Fairview and Lockwood roads, the highway patrol said.

The mangled wreckage of a car that was swept away by floodwaters in Montecito, California.