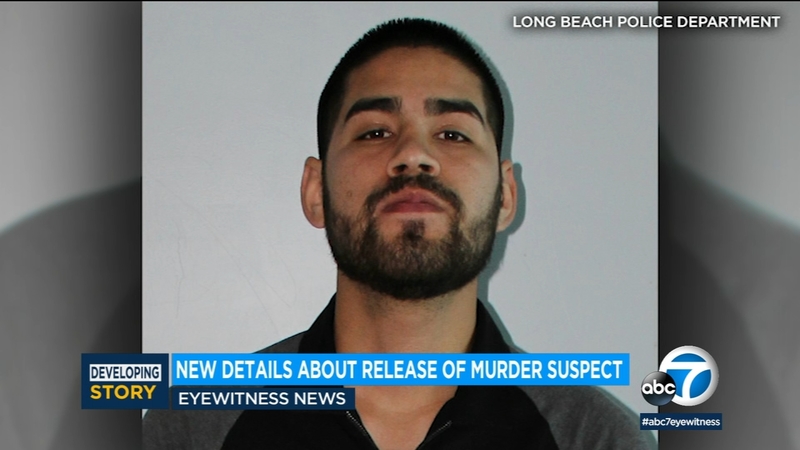 LOS ANGELES (KABC) -- Officials have provided new details about how a murder suspect was mistakenly released from custody in downtown Los Angeles and remained at large Thursday - despite a manhunt that shut down a major freeway at rush hour.

Steven Manzo, 23, is one of three men charged with fatally shooting another man in Long Beach in 2018. Manzo was arrested a year ago and had been incarcerated since then.

Manzo was supposed to be in the Long Beach court Monday for a preliminary hearing for the case, but he was not transported to court from jail by the sheriff's department, according to the DA's office. Because the case's other defendants would not agree to a postponement, the prosecutor asked that the case be dismissed and immediately refiled with the same charges so the hearing could be held later.

Manzo was ordered held without bail and his new arraignment was scheduled for March 23. The other defendants pleaded not guilty, the district attorney's office said.

While court records show the new case with its refiled charges, jail records only indicate Manzo's release due to a dismissal of charges. The sheriff's inmate locator indicated the reason for the release was that the case was dismissed, leading to Manzo being released from custody.

"The Court takes this matter extremely seriously and is thoroughly reviewing the situation," the Superior Court of Los Angeles County said in a statement Wednesday.

Prosecutors and two law enforcement agencies appeared to deflect blame for the error.

Long Beach police say "we can certainly confirm the error was not on our end" and referred questions to the district attorney's office.

The sheriff's department, which processes inmates, insists deputies did not "erroneously" release the suspect because they received the so-called "order for release" from the court.

"As such the Department complied with the court order and processed the individual for release," the department said in a statement, telling reporters to contact Long Beach police or the DA's office.

The district attorney's office, however, said the case's prosecutor on Tuesday "became aware that the defendant had been released from custody and alerted law enforcement."