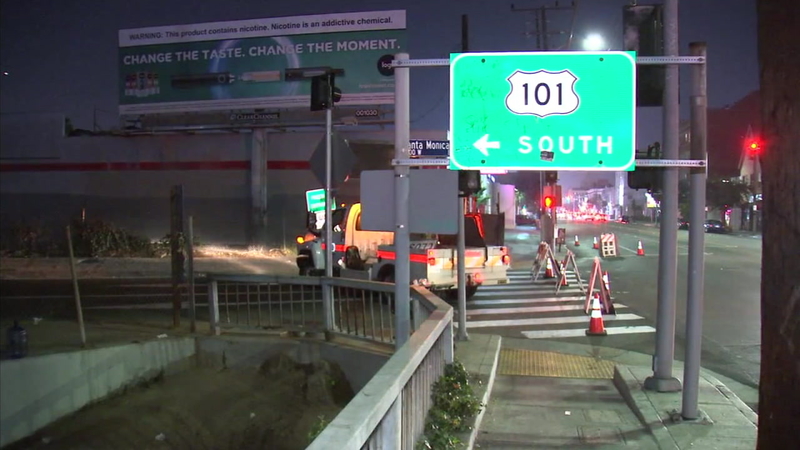 HOLLYWOOD, LOS ANGELES (KABC) -- A chase that ended in an officer-involved shooting near the 101 Freeway shut down all southbound lanes of the highway for several hours in East Hollywood on Sunday.

Los Angeles police confirmed the shooting occurred near the Santa Monica exit of the freeway. The southbound 101 at Melrose Avenue was shut down for the investigation and reopened shortly before 10 p.m., according to authorities from the LAPD.

Police said the incident began at about 3:40 p.m., when a black Range Rover led authorities on a chase from Western Avenue, south of Santa Monica, and ended on the southbound 101 Freeway. The suspect and a passenger exited the vehicle with a handgun and an officer-involved shooting occurred. No officers were injured, police said.

"Unknown at this point whether he pointed it at officers or not or if he discharged the firearm at the officer," said LAPD Sgt. Frank Preciado.

Despite being shot twice, the driver took off. He jumped over the median and ran into a nearby neighborhood. Witnesses called 911 saying the suspect was trying to get into an apartment complex. The LAPD then sealed off the area.

The suspect was eventually found by a Metro K-9 unit and taken into custody with non-life-threatening injuries, police said. The suspect's gun was also recovered. The second suspect gave himself up right after the officer involved shooting.

"I saw a man get taken out in handcuffs by multiple armed men - police officers - had search dogs," said Hollywood resident Kenny McCabe.

The LAPD tweeted that authorities were "conducting a thorough investigation" that required the freeway to remain closed from Western to Vermont avenues.

We understand this Officer-Involved Shooting in Hollywood caused some motorists to be delayed in traffic for a considerable amount of time, but your safety is always our top priority. We had a perimeter, which included the 101 fwy, as we searched for an armed & dangerous suspect.