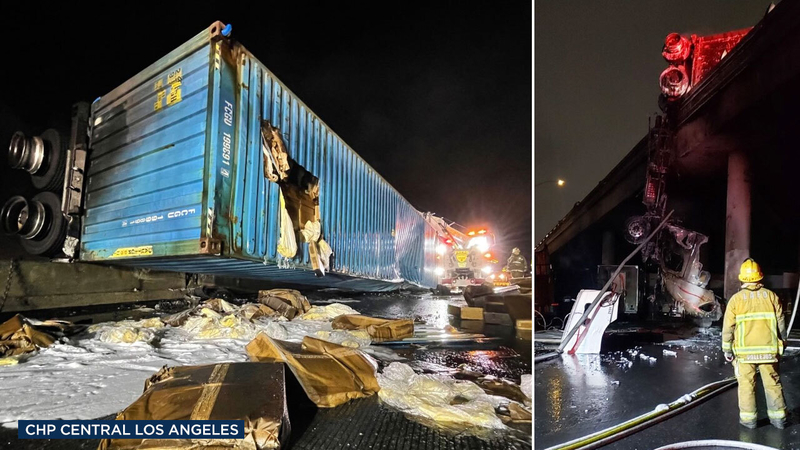 LOS ANGELES (KABC) -- At least 50 rain-related accidents occurred on Southland freeways Friday morning as a powerful storm moved through the region, including a tractor trailer that rolled over, caught fire and came to rest hanging over the edge of the 10 Freeway in downtown Los Angeles.

The crash occurred about 3:35 a.m. near the Santa Fe Avenue exit, according to the California Highway Patrol.

Firefighters were able to extinguish the fire in the semi in about 45 minutes and create a larger fall zone as the tractor portion of the rig was slipping, the Los Angeles Fire Department's Margaret Stewart said.

Storm timeline: How long will rain continue across Southern California?

Flames had threatened a nearby commercial building, but it was defended from damage, she said.

The driver of the truck, which was carrying clothing, was able to jump out of the truck's dangling cab and landed on the ground about 10 feet down. The driver was suffered minor injuries, officials said. One patient who was not in the truck was taken to a hospital in unknown condition, Stewart said.

All eastbound lanes of the Santa Monica Freeway near Santa Fe Avenue were closed until about 6 a.m., when the Nos. 1 and 2 lanes were reopened. Efforts were continuing to remove the wreckage, the CHP reported.

"The message is like every rain day. We don't get much rain in L.A., but we can't advise the public enough to slow down, especially when you're driving a truck of this magnitude," said Roberto Gomez with the CHP. "As you can see it has an exit. Whether that driver was trying to exit suddenly is part of the investigation, but the evidence shows it right there."

The massive system that dropped nearly an inch of rain in parts of the region was blamed for dozens of accidents.

According to the National Weather Service, nearly an inch of rain fell in Woodland Hills and La Canada Flintridge in the San Fernando Valley Thursday, as well as in East Pasadena and Newhall. More than an inch of rain was reported in Culver City, and about 0.70 inches fell in downtown Los Angeles, Bel Air and Saugus.

A winter storm warning was in effect until 3 p.m. Friday, with 1 to 3 feet of snow potentially accumulating at elevations above 6,000 feet, along with winds gusting up to 55 mph.

A flash flood watch was in effect for the mountains and the Antelope, Santa Clarita and San Gabriel valleys, mainly affecting areas near the Lake, Bobcat and Ranch 2 burn areas. Forecasters said the areas could see rain rates of 0.75 inches per hour, potentially leading to "significant mud and debris flows.''

A winter storm that dropped nearly an inch of rain in several parts of Southern California overnight sparked mudslides in Orange County and prompted evacuation warnings.

Video from the scene in the Silverado Canyon area appeared to show damage to at least one home. No injuries have been reported.