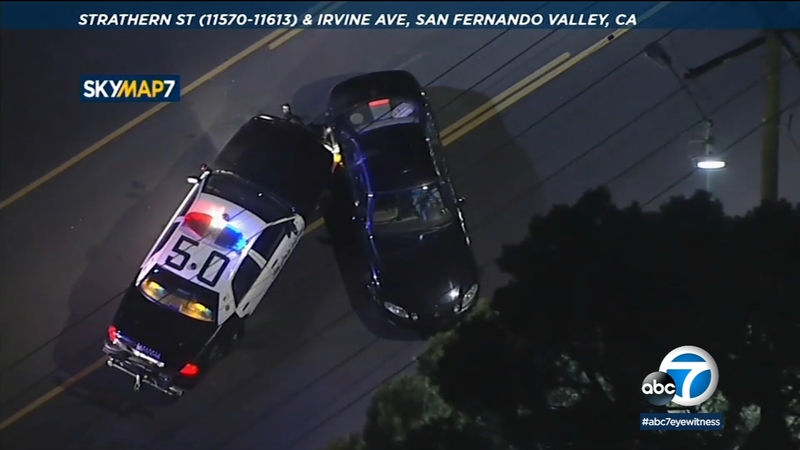 LOS ANGELES (KABC) -- Multiple police vehicles broadsided a suspect's car to stop him from fleeing after a chase that ended in the San Fernando Valley Friday evening.

The suspect kept on driving after three PIT maneuvers by police, but he stopped the car a short time later and surrendered.

AIR7 HD was over the scene around 7:20 p.m. as Pasadena police were in pursuit. Police initially said the suspect was possibly wanted for grand theft auto, but later clarified that the suspect failed to stop for a traffic violation.

Police were chasing the vehicle on the 134 Freeway, and later backed off as the suspect exited the 170 Freeway at Roscoe Boulevard. Police then picked the chase back up in North Hollywood.

As the chase was near Irvine Avenue and Strathern Street, the first PIT maneuver was done, and forced the suspect's car to spin. Another PIT maneuver was performed before a third police vehicle broadsided the car.

The suspect kept driving until stopping the car near Tujunga Avenue and Strathern in Sun Valley.

After several minutes of the suspect staying inside the car, he eventually surrendered and was taken into custody.

The 50-year-old suspect was believed to be driving under the influence of narcotics. He was taken to a hospital to be checked on.
Report a correction or typo
Related topics:
sun valleysan fernando valleylos angeleslos angeles countypolice chasecar chase
Copyright © 2021 KABC-TV. All Rights Reserved.
More Videos
From CNN Newsource affiliates
TOP STORIES