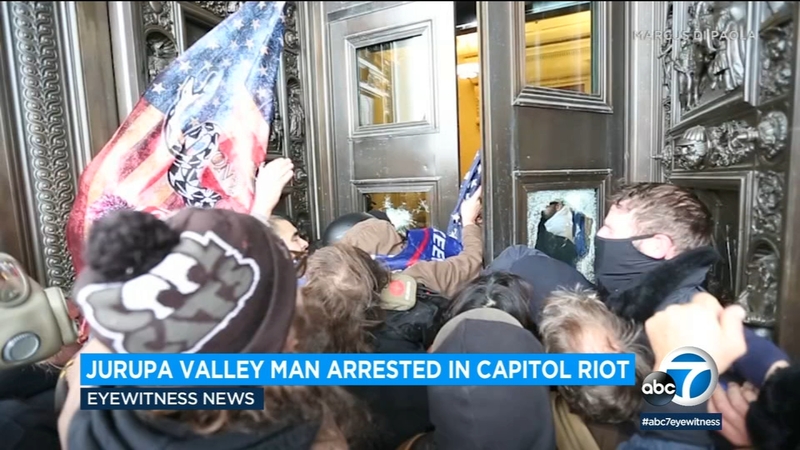 JURUPA VALLEY, Calif. (KABC) -- A Jurupa Valley man has been arrested for allegedly participating in last month's breach of the U.S. Capitol in Washington.

Andrew Hernandez was taken into custody by the FBI on Thursday, according to the Department of Justice. He was charged with obstruction of Congress, unauthorized entry of a restricted federal building and disorderly conduct.

According to the FBI, photos posted on social media were used to identify the 44-year-old as one of the rioters who stormed the Capitol building.

Hernandez has been ordered to appear in court in Washington, D.C., by March 4.

Security officials testifying at Congress' first hearing on the deadly siege of the Capitol cast blame and pointed fingers on Tuesday but also acknowledged they were woefully unprepared for the violence.

A Jurupa Valley man has been arrested for allegedly participating in last month's breach of the U.S. Capitol in Washington.

Senators drilled down on the stunning security failure and missed warning signs as rioters loyal to former President Donald Trump stormed the Capitol on Jan. 6, in a misguided attempt to stop lawmakers from certifying President Joe Biden's election.

Five people died in the attack, including a Capitol Police officer. The security officials lost their jobs, and Trump was impeached by the House on a charge of inciting the insurrection, the deadliest attack on Congress in 200 years. Trump was ultimately acquitted by the Senate.