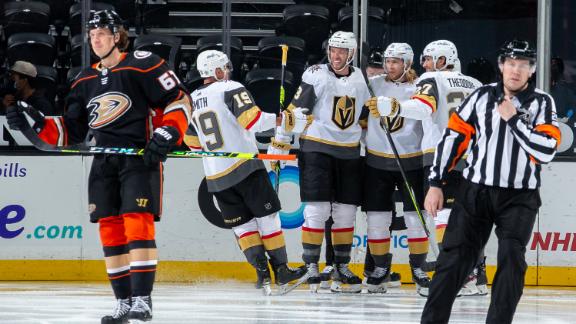 ANAHEIM, Calif. -- - Robin Lehner made 16 saves for his first shutout of the season and 16th of his career, and the Vegas Golden Knights extended their winning streak to five games with a 4-0 victory over the Anaheim Ducks on Friday night.


Stephenson added an assist and Mark Stone had two assists to help Vegas improve to 3-0 on its four-game trip to Southern California to face the Los Angeles Kings and Ducks. Vegas and Anaheim complete a two-game set Sunday.

"I don't know if it's the most complete (game), but I think we're starting to feel like every game is going for longer periods in the right direction," coach Peter DeBoer said. "We're starting to dictate games pretty consistently here, which is what you want to do down the stretch."

John Gibson made 44 saves as last-place Anaheim saw its two-game winning streak end. Gibson, who saved a penalty shot by Stephenson with 5:27 remaining, was back in goal after Anthony Stolarz picked up a pair of victories while giving up just one combined goal against San Jose.

"We were coming off two good games in San Jose and feeling pretty good about our game, but obviously tonight is definitely a step in the wrong direction," Anaheim forward Jakob Silfverberg said. "We kind of played slow, we got stuck out there on long shifts because we couldn't make plays with the puck."

Lehner, who missed over a month of play between February and March with a concussion, made just his 13th start of the season while picking up his 10th win. It was his first shutout since March 3, 2020, against the New Jersey Devils.

Stephenson delivered a little more than four minutes later for a 2-0 lead when he took a pass from Stone as he charged into the Ducks' zone and lifted a shot past Gibson and inside the left post for his 10th of the season.


Roy scored his fourth of the season with 22 seconds remaining in the second period when he stole the puck from Anaheim's Max Comtois, weaved through traffic and scored over Gibson's right shoulder.

"If we can keep playing like that, then we're going to be a pretty tough team to beat," Karlsson said. "We need this to be a part of our identity and it's a challenge every game."

McNabb's goal with 12 minutes remaining was his second of the season and came off assists from Stephenson and Stone. It was the team-leading 34th assist of the season for Stone.

NO GO FOR NOSEK

Two days after Tomas Nosek recorded a season-best three points (one goal, two assist) for the Golden Knights in a 6-2 victory over the Los Angeles Kings, the forward was a late scratch.

Nosek was a game-time decision, according to DeBoer, with an undisclosed injury.

The Ducks welcomed fans back into Honda Center for the first time since March 11, 2000. It was a small gathering of about 2,000, with tickets available first to Anaheim season-ticket holders, but a handful of Golden Knights fans managed to make themselves heard amid the intimate gathering.

"It was unbelievable to have our fans back in the building; there was a real buzz in there," Ducks coach Dallas Eakins said. "I think the only good thing that came out of that game was how supportive our great fans are here trying to push us along."

The Ducks have four more home games remaining, including one Sunday against the Golden Knights and another between the teams on April 24. The final two Ducks home games are against the crosstown rival Los Angeles Kings on April 30 and May 1.