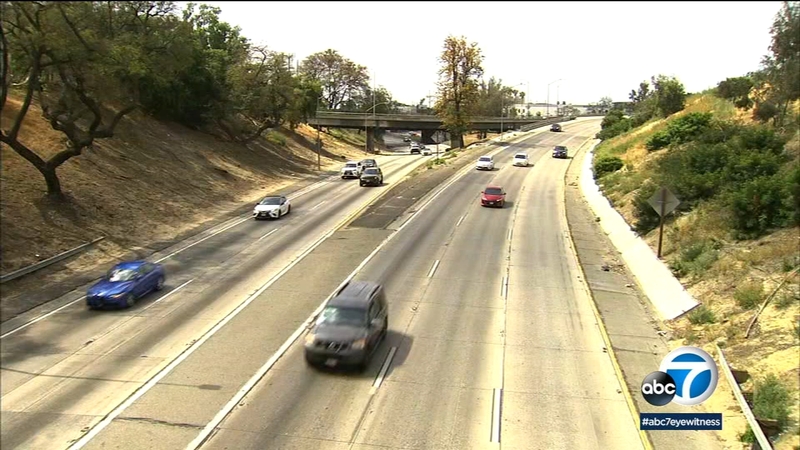 Work on the southbound freeway was completed at 8:45 a.m. Sunday, according to Caltrans. Drivers were allowed to use the freeway in both directions, but the right lane on the southbound side would remain closed for landscape work until 1 p.m.

Several concrete slabs were removed and replaced near Sixth Street following the successful Sixth Street Bridge Replacement Project concrete pour for the arches over the freeway.

"For efficiency and less impact to motorists, Caltrans took advantage of the freeway closure for the city's operation and repaired the pavement by replacing damaged concrete slabs under the bridge,'' Caltrans District 7 Director Tony Tavares said. "Caltrans also took the opportunity to spruce up the area during a SWARM operation.''

What's aiming to be an iconic landmark in the heart of Los Angeles is nearing its completion date and the construction not only features groundbreaking designs, but a groundbreaking workforce.

Maintenance crews conducted several activities simultaneously that included litter and debris removal, weed abatement, guardrail repair, graffiti removal and tree trimming between Interstate 10 and the Pomona (60) Freeway.
The northbound side of the 101 Freeway was opened Saturday at 8 p.m.

Officials had said the freeway would reopen at 5 a.m. Monday.

The $588 million Sixth Street Viaduct Replacement Project is the largest bridge project in L.A. history.
The previous Sixth Street Viaduct, which was built in 1932 and connected Boyle Heights with downtown L.A., was a Los Angeles landmark for its appearances in films such as "Grease,'' "Terminator 2: Judgment Day'' and dozens more. The bridge needed to be replaced due to seismic vulnerability and deterioration caused by a chemical reaction in the concrete. On Feb. 5, 2016, the Bureau of Engineering began demolition work.

The bridge is being replaced with a design by L.A. architect Michael Maltzan and will resemble a Ribbon of Light'' with 10 sets of arches that light up at night. Former Councilman Jose Huizar, who represented the district, told City News Service in 2016 that the new bridge design would make it "a destination point, not only a means to get over the river.''
Once the new viaduct is completed in the summer of 2022, the Bureau of Engineering plans to create a 12-acre park underneath the bridge to provide access to the L.A. River, public art, recreational programming and more.

The Los Angeles Bureau of Engineering partnered with contractors Skanska-Stacy & Witbeck, which led construction for the viaduct replacement project. Each arch is 10 feet wide and spans about 300 feet, and takes about 65 trucks of concrete to create.