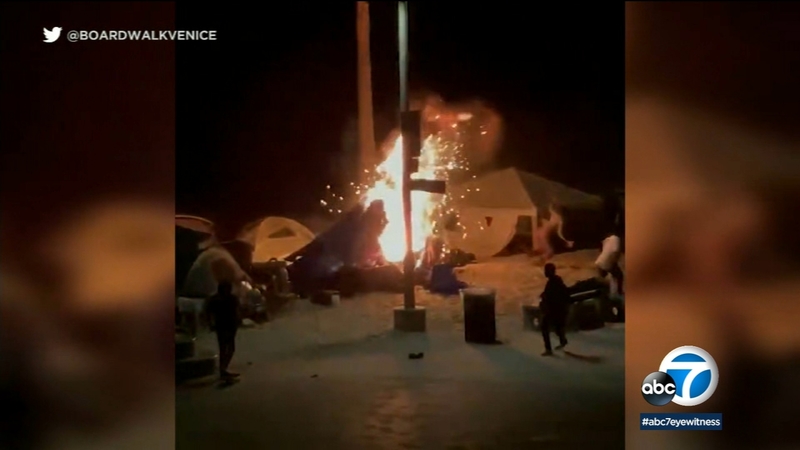 VENICE, LOS ANGELES (KABC) -- The Venice boardwalk is now a huge homeless encampment. There are fights, fires and even shootings.

Isabel Storey was walking her dogs and saw the line of tents.

There are counselors here almost every day trying to find shelter for these folks, but the counselors say many simply don't want to leave. Robert is one of those.

"Shelters are just prisoner of war camps for the homeless. I'd rather be free than have all that. I get up when I want, go in when I want, no no curfews or anything like that," he said.

"We can no longer use our town. Most of us have spent a lot of money on cameras, on fencing, on new locks. I've had two attempted home invasions, my life has been threatened once," said Vicki Halliday.

This is Councilmember Mike Bonin's district. He says the solution is more housing.

"We need to be doing everything we can to get as many people housed as quickly as possible," says Bonin.

"You promised us a cleanup when bridge housing went in, which I live very near. It's a disaster zone. We no longer believe anything he says," says Halliday.

Bonin says he is open to finding any solution.

"We can't be at a place anymore where we're saying no to alternatives to homelessness," he said. "If we say no to an alternative to homelessness, we need to say yes to something else."
Report a correction or typo
Related topics:
venicelos angeleshomeless in southern californiahomeless
Copyright © 2021 KABC-TV. All Rights Reserved.
TOP STORIES
California now only state at 'moderate' COVID transmission level
SoCal parents, teachers rally against student vaccine mandate
Ridley-Thomas will 'step back' from LA City Council
Rising sea levels could submerge Santa Monica Pier
3 injured in fire at Canoga Park marijuana grow operation
Passengers do nothing as woman is raped on train, police say
How to see next meteor shower, full moon, more
Show More
Colin Powell dead at 84 from COVID-19 complications
18-month-old in stroller dies in North Hills crash
Judge approves Kanye West name change to Ye
Mom delivers 14 lb. baby after suffering 19 miscarriages
Marc Brown honored with Joseph M Quinn Award for Lifetime Achievement
More TOP STORIES News