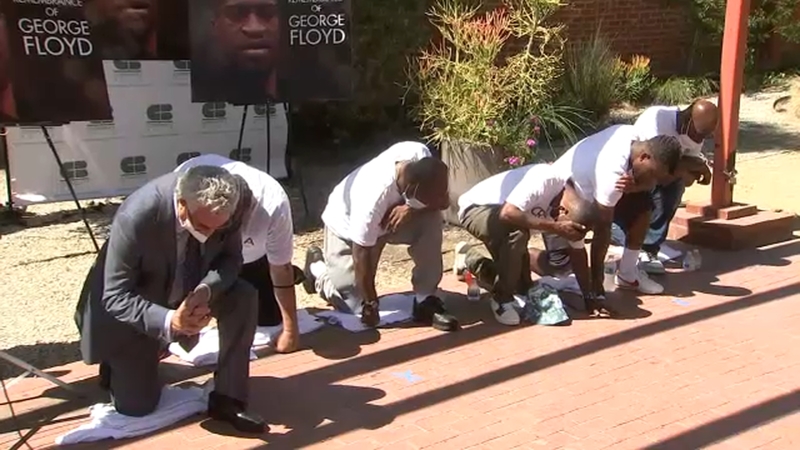 LEIMERT PARK, LOS ANGELES (KABC) -- One year after George Floyd was murdered in Minneapolis police custody, several events throughout Southern California Tuesday were held to remember him and reflect on changes after his death sparked waves of protests across the country.

At another remembrance event in Leimert Park, some kneeled for just over nine minutes to mark the amount of time former Minneapolis police officer Derek Chauvin had his knee on Floyd's neck.

Floyd's killing sparked months of civil unrest as millions of Americans around the nation took to the streets to call for police accountability and to attempt to dismantle systemic racism.

Rallies and festivals are planned to mark one year since the murder of George Floyd.

In Leimert Park, a discussion of whether any significant change has happened over the past year was brought to the forefront.

Some expressed optimism that Floyd's murder will lead to changes into how we see each other as people.

"We're memorializing today and we will memorialize in the future, unfortunately, because that's just the world we live in. But each one of us has a sphere of influence, each one of us has influence over another and if we come together, we can begin to change things. But change doesn't happen from the outside in, it happens from the inside out," said Superintendent Anthony Williams, senior pastor at 88th Street Temple COGIC.

"I hope this will spark something today in many of us to go back to wherever our communities are, our spheres of influence, and try to make a difference and make the world a better place," he said.

In Hollywood, a group of activists and protesters took over intersections at times during the evening.

One group urged people not to forget Floyd and the many other lives lost to police brutality.

Floyd's family visited Washington on Tuesday to mourn with President Joe Biden and prod congress to act as they commemorate the loss of their brother, father and son one year ago.

"Today is the day that he set the world in a rage," Floyd's brother Philonise said, addressing reporters at the Capitol alongside family members, Democratic House Speaker Nancy Pelosi and other lawmakers. "We need to be working together to make sure that people do not live in fear in America any more," he said.

"It was a remembrance of what happened to my brother," Philonise Floyd said. He said of the meeting with Biden, "It was great, he's a genuine guy."