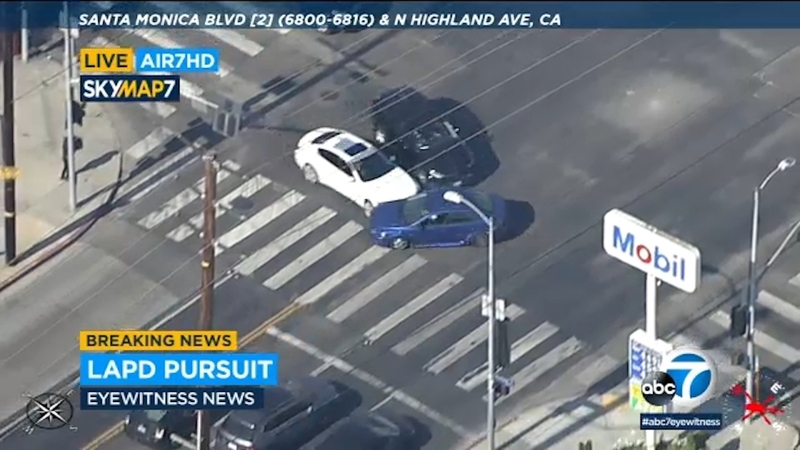 HOLLYWOOD, LOS ANGELES (KABC) -- A possibly drunk driver led police on a wild chase through the streets of Hollywood, finally ending when she was T-boned as she ran a red light at a major intersection.

The chase began around 4:30 p.m. in Hollywood as officers began pursuing a DUI suspect.

The woman in a blue Mitsubishi fled over surface streets, including Hollywood Boulevard, Santa Monica Boulevard and other busy major roadways. At one point officers performed a PIT maneuver but she was able to keep going, weaving through afternoon traffic. They also tried deploying spike strips but that did not slow her down.

Less than half an hour after the chase began, the woman crossed a red light into the intersection at Santa Monica Boulevard and Highland Avenue. Two cars driving on the cross street at moderate speeds broadsided the Mitsubishi in the intersection, sending it spinning out and coming to rest on the sidewalk in front of a Mobil station.

At that point, the woman stepped out of her vehicle as officers swarmed the scene.

She sat down on the sidewalk, her hands propped behind her. Officers moved in and she struggled briefly but they were able to get her under control and take her into custody without further incident.