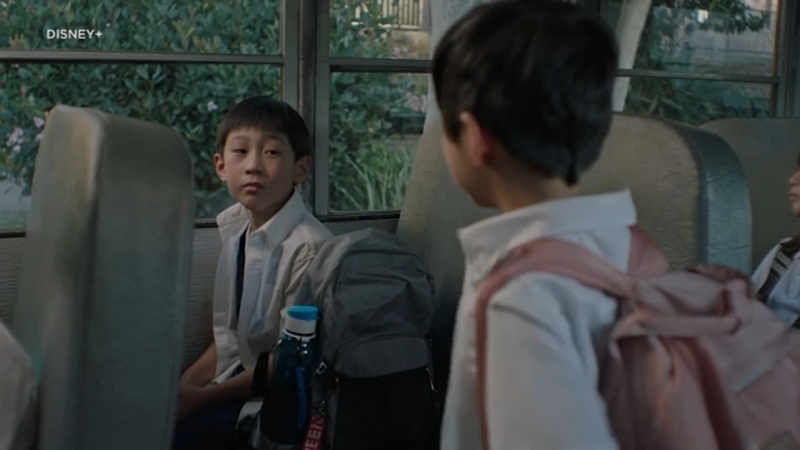 HOLLYWOOD -- Six filmmakers from underrepresented backgrounds were selected for the freshman class of a new Disney inclusion initiative called "Launchpad." The goal of "Launchpad" is to diversify the types of stories that are being told through film, and to give access to those who have historically not had it

The first hurdle: paring down the many talented future filmmakers who applied for the program!

"We had over 1100 applications within the U.S. Getting them down to six was extremely, extremely challenging," said Mahin Ibrahim, Director of Disney's Diversity & Inclusion.

"The vision is to keep empowering underrepresented filmmakers, to bring more people into the system; give more people exposure, because storytellers are hungry and looking for opportunity," said Phillip Yaw Domfeh, Senior Manager of the LAUNCHPAD program.

Those filmmakers selected: Aqsa Altaf, Hao Zheng, Ann Marie Pace, Stefanie Abel Horowitz, Moxie Peng, and Jessica Mendez Siqueiros. Since this was a new initiative, none of the artists knew what to expect. But they all jumped in whole-heartedly!

"Going through it, and seeing how Disney actually did everything to support us, from script phase up until post-production and marketing and publicity. They have just been true to their word doing everything they can. Basically we're getting the same department, the save love that all the big movies at Disney get. And to me, as an up and coming filmmaker there's nothing more I could have asked for," said Altaf, director of "American Eid."

"Having this opportunity with Disney Launchpad, finally creating something that I didn't see represented on the big screen and I hope that kids like me, like now that they're growing up, they can feel they are seen. And that they can be true to themselves," said Zheng, director of "Dinner is Served."

"It was by and far a life-changing experience. I knew going in it was going to be something special but I didn't realize how supportive and loving the program would be. I felt so safe and empowered the entire time, encouraged to tell my story in my own way, in my own voice. Sometimes you hear horror stories of that not happening. But they were so encouraging of us, and trusting us with that. Through and through, we had Disney music, casting, VFX, all just teaming up to help us, who all believed in this program so fully and wanting our stories to be told," said Pace, director of "Growing Fangs."

"It is too good to be true! It was such a thrill; and then the program exceeded my expectations. I had no idea what to expect. I'm so grateful because it put together by some really wonderful folks. I think at the core of it they understood to go through this big launch the best they could do for us was give us support. We were given mentorship, classes; the mentors were really spirit guides to us as we sort of walked this new road. And on top of that we were given these five other filmmakers and I can't imagine going through this process without them," said Horowitz, director of "Let's Be Tigers."

"I think we all felt very lucky. We took a chance. We wrote a story with our hearts and we got accepted to Launchpad. And we had this great mentorship and partnership, they really helped us find our voice, and tell our own voice. It's life changing experience for all of us and I'm so glad I'm doing it with the other five of them. It's really scary as an independent filmmaker, you're suddenly making studio films. It's like jumping out of plane, and now you're jumping out with a parachute and with a bunch of other people, feeling like you can do it," said Peng, director of "The Little Prince (ss).

The new season will include a writer's track, making it possible for aspiring LAUNCHPAD filmmakers to apply as a writer, writer/director, a director with a script someone else wrote (so as a team) or as a director, enabling Disney to bring even more storytellers into the fold. Submissions are being accepted now through June 11 at LAUNCHPAD.Disney.com, with the narrative focus on the theme of "connection."
Report a correction or typo
Related topics:
arts & entertainmentmoviedisneydisney+ streaming servicediversity
Copyright © 2021 OnTheRedCarpet.com. All Rights Reserved.
TOP STORIES
Dodgers beat Atlanta, narrow NLCS gap to 2-1
LA City Council to consider suspending Ridley-Thomas from office
As NBA season opens, Staples enforcing strict COVID protocols
Ex-Olympic boxing champ pleads no contest for molesting 2 girls
SF In-N-Out shut down after defying COVID vaccine mandate
All counties in California now under drought emergency declaration
Mobile home residents fed up with Dominguez Channel smell
Show More
2 men dead after fire at Canoga Park marijuana grow operation
LGBTQ+ pioneers among those featured at ONE Archives at USC
Mark Ridley-Thomas to surrender Wednesday ahead of arraignment
Record number of container ships waiting to enter SoCal ports
Taco Bell is giving away free breakfast burritos
More TOP STORIES News