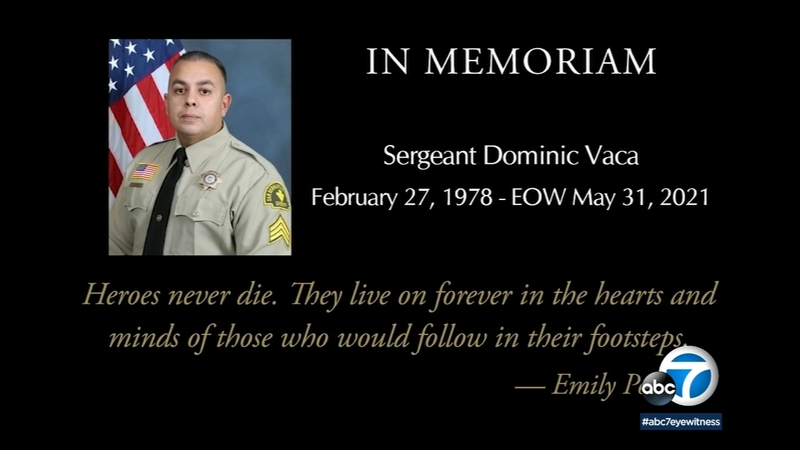 SAN BERNARDINO, Calif. (KABC) -- A memorial service was held Friday for a San Bernardino County sheriff's deputy who was fatally shot in the aftermath of a motorcycle chase on Memorial Day.

A procession for Sgt. Dominic Vaca departed from the San Bernardino County Coroner's Office at 6:45 a.m. and made its way to the Glen Helen Amphitheatre, where the private memorial service was held at 10 a.m.

More than 4,000 people paid tribute, including law enforcement from as far away as New York.

Words used to describe the 43-year-old sergeant, known fondly by many as "Dom," included accountability, inspiration, passion and humility.

Colleagues said at a time when working in law enforcement has never been more difficult, he pushed forward -- fighting for good, and making the ultimate sacrifice.

"We're proud of Dom for taking a risk and doing what he thought was just and righteous on Memorial Day, we wouldn't expect anything less," said Sgt. Audo Moreno. "But we are saddened and outraged with how it ended. And I will say that evil did not prevail on that day, Dom will shine."

Officer Mario Moreno reflected on his relationship with Vaca.

"Dominic and I were well aware of the dangers at work, and when we would hear about major incidents, we text note each other for a status check. On May 31st, my status check went unanswered."

Following the memorial service, another procession was held along with a gravesite funeral at Riverside National Cemetery.

Vaca, who also served six years in the Army, is also survived by his children.

This comes nearly two weeks after the 17-year veteran of the department who served at the Morongo Basin Station was killed in a shootout at the end of a pursuit in Yucca Valley.

Deputies attempted to conduct a traffic stop after spotting the suspect, later identified as Bilal Winston Shabazz, without a license plate near the intersection of Paxton Road and Imperial Drive. The man on the motorcycle refused to pull over and a chase ensued, the sheriff's department said in a statement.
During the pursuit, the suspect "bailed out of the vehicle" near Dumosa Avenue and Sunnyslope Drive and ran into the desert, the news release said.

A deceased man has been identified after authorities say he fatally shot a San Bernardino County sheriff's deputy in the aftermath of a motorcycle chase. The suspect was later shot and killed in a separate confrontation.

Vaca was airlifted to a hospital but succumbed to his injuries.