Biden takes on inflation concerns as agenda hangs in the balance 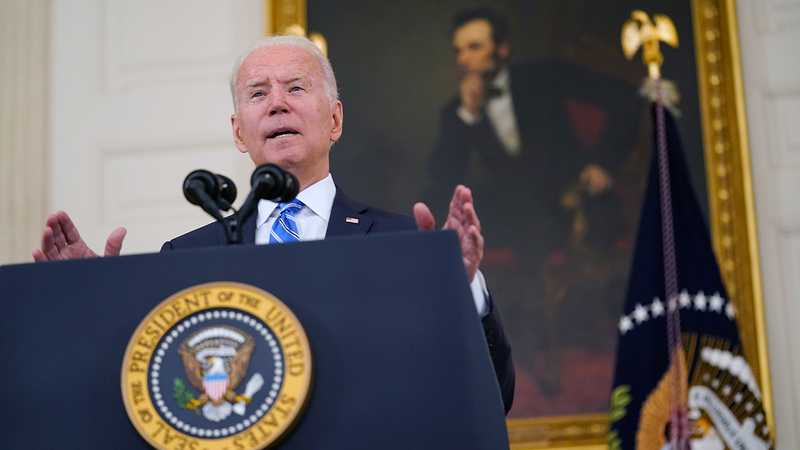 Biden takes on inflation concerns as agenda hangs in the balance

WASHINGTON -- President Joe Biden on Monday directly addressed concerns that his sweeping economic agenda will serve as an accelerant to inflation amid growing concern about price hikes across the economic spectrum.

"It turns out capitalism is alive and very well. We're making serious progress to ensure that it works the way it's supposed to work: For the good of the American people," Biden said at the White House.

Biden used his scheduled economic remarks to tout a recovery that has seen a burst in growth and more than 3 million new jobs since he took office, as the country continues to dig out of a pandemic-driven economic shock that pushed the US economy to the brink.

Across forecasts, the US is projected to hit growth rates that haven't been seen in decades -- a point the White House attributes to intertwined $1.9 trillion Covid relief law and a vaccine distribution effort that has led to the full vaccination of more than 160 million Americans.

But Biden also used the occasion to attempt to disarm a line of attack that has resonated in recent weeks as inflation has hit its highest point in 12 years and the US economy continues its emergence from what was essentially a total freeze as the pandemic swept the country.

Beyond the benefits the White House sees in the plans themselves from a direct policy perspective, Biden will argue his proposals are designed to increase the economy's capacity and thus decrease prices over time, a view that has driven the perspective inside the White House that rising prices should have no effect in shifting their legislative course.

It is, in a sense, an effort to flip the GOP argument against his proposals on its head -- and directly counter an issue that Democrats on both sides of Pennsylvania Avenue have acknowledged could threaten Biden's legislative goals.

For the President, the remarks come at a critical moment for his $4 trillion economic agenda on Capitol Hill. The bipartisan group instrumental in crafting the infrastructure framework has urgently worked over the last several days to reach a final agreement before a likely July 21 Senate procedural vote.

Senate Majority Leader Chuck Schumer, a New York Democrat, has also set a deadline for his members to coalesce around a second, Democrat-only proposal that forms the backbone of the most aggressive spending and investment proposal in a generation.

But the legislative deadlines come as there is evidence of growing concern around the country about inflation and a clear effort by Republicans to use the price increases as a weapon to try and sink Biden's push for his agenda.

The National Republican Congressional Committee, the House GOP's campaign arm, has launched efforts to target frontline Democrats on the issue on the political front, as senior Republicans have attacked the looming Democrat-only proposal as wholly unnecessary for an economy that has already been on the receiving end of trillions in emergency spending over the last 15 months.

"Our colleagues need to take this summer and think very carefully about what they are discussing," Senate Minority Leader Mitch McConnell, a Kentucky Republican, said last week. "It would be hard to imagine a proposal less suited to the conditions of our country at this point."

It comes as economists in both parties have signaled the data is serving as a flashing warning sign about inflation, and as a Marist poll last month for NPR and the PBS NewsHour showed that inflation has surpassed wages and unemployment as the public's top concern about the US economy.

The White House economic team has been closely monitoring the numbers and officials say it still firmly believes the data is both transitory and more a result of the uneven emergence of the economy from a once in generation supply-side shock -- one that has created a series of bottlenecks in the supply chain and supply and demand mismatches that continue to linger.

"The overwhelming consensus is it's going to pop up a little bit and then go back down," Biden said last month.

Still, White House officials acknowledge that while they believe the increases are a short-term issue, it's still one that will likely be present for months, if not longer. The 5.4% increase in June's consumer price index -- the largest such year-over-year increase since 2008 -- only served to underscore that point.

It's a key reason for Biden's effort Monday to detail how, in the view of White House economic officials, his agenda would fit into that data if enacted.

The President will lay out the view that the scale of the dual proposals -- nearly $600 billion new infrastructure spending and a nascent $3.5 trillion proposal designed to include sweeping investments in education, home care and paid leave -- would serve to create an environment to keep prices low and stable, the official said.

Biden will key on the investments as longer term and crafted to enable a combination of more opportunities for Americans to enter the labor force, which would in turn increase the supply of goods, all as it bolsters the resiliency of supply chains in a concerted effort to reduce production costs and the ability to bring goods to market.