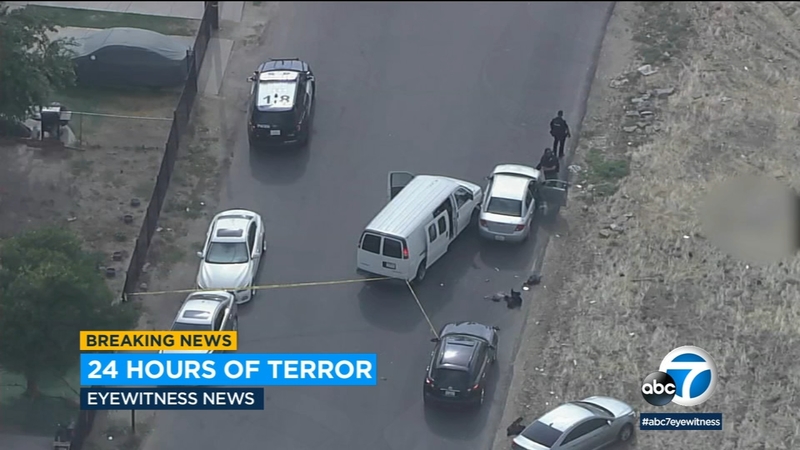 The suspect and both officers were struck by gunfire. Both of the officers are described as being alert and able to communicate as they were transported to Loma Linda Medical Center.

Video from an eyewitness captured the dramatic shootout that unfolded between the suspect and police near Rosemary Drive and Victoria Avenue. The suspect is seen exiting from the passenger side of a car and open fire as officers shoot back and fatally wound him.

Video from an eyewitness captured the dramatic shootout that unfolded between the suspect and the police in Highland.

The suspect has been identified as Ervin Olikong, 34, described as a dangerous gang member with an extensive criminal history, including assault and robbery. In addition to Tuesday's ambush of a deputy, he was wanted on a warrant for assault with a deadly weapon, according to San Bernardino Police Chief Eric McBride.

"We don't know why he engaged that deputy in the ambush yesterday, but obviously he has a very violent criminal history and background," McBride said.

After investigators identified Olikong as the suspect in the deputy shooting, they placed him under surveillance for several hours Wednesday, and then moved in to make an arrest, McBride said.

A suspect is dead at the scene of an officer-involved shooting that left two San Bernardino police officers injured in Highland in an incident related to Tuesday's shooting of a sheriff's deputy.

At that point, he started firing at the San Bernardino Police Department officers, and they fired back. Two officers were wounded and Olikong was killed. A handgun was recovered at the scene.

"You heard like five, six shots and then the cops shoot back. That's another five, six shots," said witness John Matias. "So you hear 12, 15 rounds go at a time. Just nothing but gunshots. It was like a war zone."

Police also took a man into custody, who witnesses said was the driver of the car the suspect jumped out from.

One of the officers shot had to be rushed into emergency surgery. Both of the wounded officers are in stable condition.

The deputy injured in Tuesday's shooting is expected to make a "full recovery" after being ambushed at the end of a high-speed chase, authorities said.

A manhunt continued for a gunman who shot and wounded a San Bernardino County sheriff's deputy at the end of a high-speed car chase.