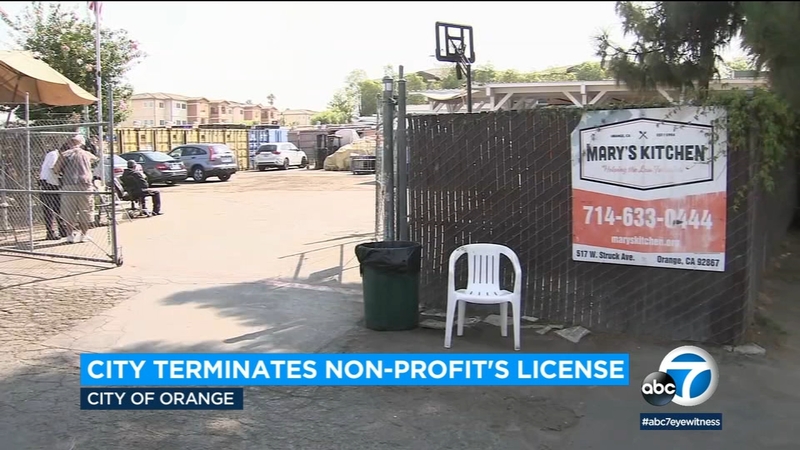 ORANGE, Calif. (KABC) -- The nonprofit "Mary's Kitchen" helps the homeless in the City of Orange but is on the verge of being shut down. The nonprofit provides clothing, showers, resources and 500 meals daily for the homeless, but many say in recent years, crime has risen in this city-owned space.

"We were left with no alternative other than to terminate their license," said Mayor Mark Murphy, City of Orange.

With the closure just a few weeks away, the city, in partnership with the county and other nonprofits, teamed up for the first of several navigation days. The goal: to connect the unhoused community with resources to manage their health and mental issues, and put them on a pathway toward stability and housing.

The CEO and president of Mary's Kitchen welcomes any help this community can get, but Gloria Suess and her attorney, Brooke Weitzman, say the facility is not going anywhere.

"If we just close on the 19th, where would they go?" said Suess.

"Mary's Kitchen leadership thinks they've complied with what the city wants and so now that we have so much of the community involved, the only reasonable position for the city to take is to rescind the notice to come to the table and to talk about what are the underlying issues," said Weitzman.

As this legal battle plays out, the first Navigation Day helped Michael McLaughlin get a roof over his head - for now. But his long-term solution is unknown. McLaughlin says his wife is disabled and he needs permanent housing where they can be together.

Mary's Kitchen in the City of Orange has been ordered to vacate its location after serving meals to the homeless community for nearly 30 years. Now, its volunteers are hoping for a lifeline so the mission can continue.