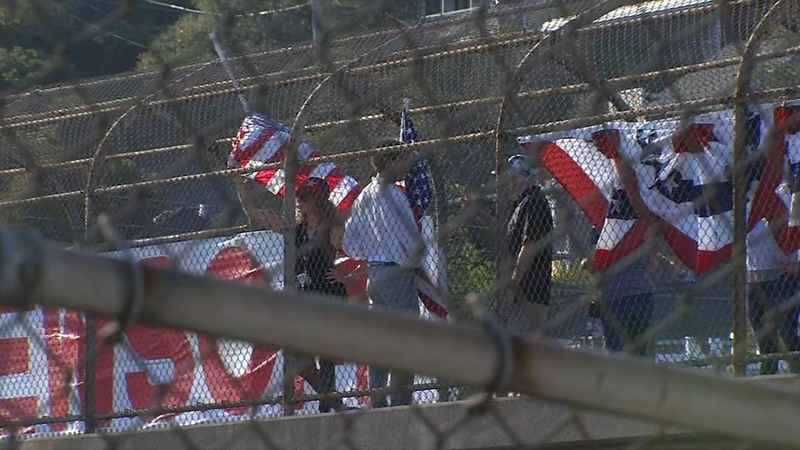 SAN RAFAEL, Calif. -- On a pedestrian walkway hovering above the 101 freeway in San Rafael, the recall election hit a fever pitch Sunday afternoon.

This group of pro-recall demonstrators say they were making their voices heard, when suddenly a man approached them holding a knife.

MORE: Everything you need to know about the recall race against Gov. Gavin Newsom

"He was slashing our signs. And he slashed one sign completely down. It's completely torn and destroyed," said Tief Gibbs.

Gibbs is a member of the group.

While she didn't witness the event herself, she spoke to ABC7 on behalf of others who did.

Gibbs says after the man started destroying the signs, one of the demonstrators confronted him trying to get him to stop.

"The assailant came towards him and pushed him back and started punching him," she said.

A sitting California Governor has only ever been successfully recalled once. Will Gavin Newsom be the next? ABC7 anchor Liz Kreutz explains how the Golden State came to this rare politic point.

Following the attack, the knife-wielding man fled on foot -- leaving his victim to be transported to the hospital, where another group member says he was diagnosed with a fractured skull and broken jaw.

While the incident has angered the rally goers, Gibbs says the attack is nothing new.

"We're in a situation here where freedom of speech is in danger," Gibbs said.

Many here say it's just another example of the kind of anger that's been directed at pro-recall demonstrators, and point to a separate incident last week where a woman threw an egg at leading GOP contender Larry Elder.

A man was attacked at a recall Gavin Newsom event today in San Rafael. I talked to some of the other demonstrators who saw the incident. I’ll have the story tonight at 11 on @abc7newsbayarea (P.S. that is not blood on the banner). #CaliforniaRecallElection pic.twitter.com/tbBEW7mV4l

As for the suspect, San Rafael police say he potentially faces charges of assault with a deadly weapon. However, he has not yet been caught.

"Currently we're following all leads to try and track down our suspect and try and identify who our suspect is," said Sergeant Christopher Duncan.

As far as Gibbs is concerned, Sunday's events won't slow her down.

She plans to be back out demonstrating on Monday.

"I will not be bullied by anti-recall people, by the no on recall group," Gibbs said.