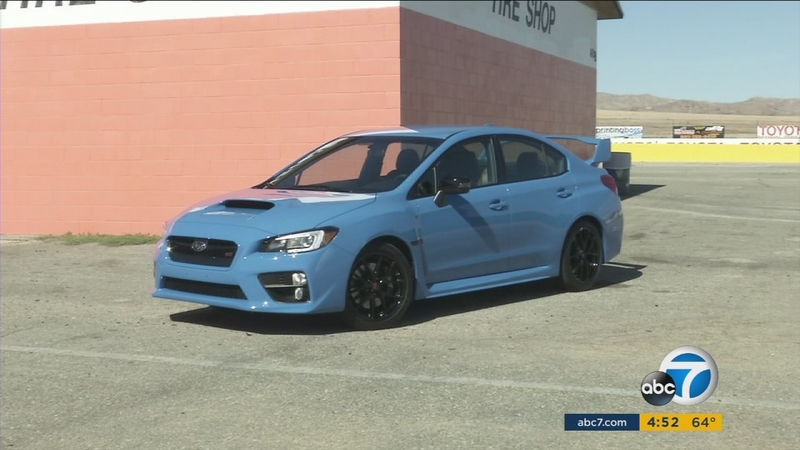 LOS ANGELES (KABC) -- Check out the rows of cars at most new car dealerships these days and you're likely to see many cars in various shades of gray, mixed in with some white and black ones. Whatever happened to vivid colors on cars?

"You see far too many white, black and gray cars today, along with different variations of silver," said Stewart Reed, the chairman of the Transportation Design Department at Art Center College of Design in Pasadena.

That does seem to be the case these days, but not always.

Subaru is now offering a very bright shade of blue on its BRZ model called "Hyper Blue," at a base price of $27,690.

It's about as bold a shade of blue as you can get for Subaru's low-slung sports car. And it's got some blue inside too, to keep the theme consistent.

If a 4-door is more to your liking, Subaru's also building a batch of Hyper Blue STi sport sedans, at a base price of $38,995.

They're only doing 700 Hyper Blue STi's and just 500 Hyper Blue BRZ's for the 2016 model year. In a sea of conservative colors, sporty car makers have found that an attention-getting color can get attention.

"I think if somebody has a garage with a bunch of cars, they're more likely to take a chance on a bright color," said Reed. "But if someone has just one car, then when it comes to color selection they tend to be a little bit careful."

Sportier cars also tend to be a more natural fit for a stronger color choice, as their younger buyers are more likely to take a chance on their car standing out in traffic.

Though both Subaru cars are obviously available in regular colors too, sometimes an auto maker will offer a special model with an in-your-face color.

For example, when BMW was saying farewell to its previous M3 model in 2013, it sent it out with a splash.

The Lime Rock Park Edition M3 paid tribute to the legendary Connecticut race track of the same name. But if you wanted one, it only came in a showy hue called "Fire Orange."

Despite silver being the traditional racing color of Germany - many years ago, race cars were painted in a theme of their home country, before sponsorships dictated the colors many German cars were coming in various shades of silver - the German manufacturers can get a little brave sometimes when it comes to color.