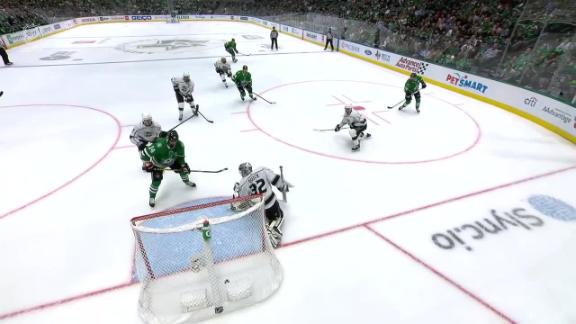 DALLAS -- - Denis Gurianov scored on a rushing backhander from the right circle 4:15 into overtime for his first point of the season to give the Dallas Stars a 3-2 win in their home opener over the Los Angeles Kings on Friday night.

Braden Holtby kept Dallas (3-2-0) in the game by stopping 43 shots. Of the Stars' three wins, two came in overtime and one in a shootout.


"Compared to shootouts, I think we should do overtime the whole time," said Holtby, who came to Dallas from Vancouver as a free agent in July. "You get scoring chances, guys can show off their skill, and it's a fun challenge for us goalies. It's awesome."

Miro Heiskanan played 29:07 and had a goal and two assists, giving the fourth-year defenseman 100 career points. Tyler Seguin had a goal and an assist after going the first four games without a point.

Anze Kopitar scored his sixth goal in the season's first four games and Gabriel Valardi scored on a five-minute major penalty for the Kings (1-2-1), who have lost three straight.

"We had quite a bit of chances; we had chances in overtime, too," Kopitar said. "It's something that, obviously, we've got to capitalize on if we want to win games."

Valardi's first goal of the season came from the right circle with just under 3 minutes left in second period, and just after veteran Kings defenseman Drew Doughty was helped off the ice with a right-knee injury and didn't return. Stars rookie defenseman Jani Hakanpaa was given the major for kneeing and a game misconduct.

"I was just trying to deny him the entry to our zone," Hakanpaa said. "It was unfortunate what happened."

Jonathan Quick made 20 saves for the Kings.


Dallas' first two goals came on the power play. Seguin scored in the final minute of the first period. Heiskanen's goal came at 10:58 of the third period, seconds after a 5-on-3 expired.

Kopitar opened the scoring on a back-door tap-in from Viktor Arvidsson, who slid a pass through traffic on one knee with about three minutes left in the first.

With goals in each of Los Angeles' first four games, Kopitar is two games short of the franchise record to open a season (Charlie Simmer, six games to open 1979-80) and matched his career best for consecutive games with a goal.

Seguin quickly evened the score 1-1 with Doughty off for cross-checking. Seguin's one-timer from the left faceoff dot followed a pass from the right point by Ryan Suter with 40 seconds left in the opening period.

Seguin played only the final three games of last season after having hip surgery in November 2020.

Dallas' first home game of the season was played before a capacity crowd at American Airlines Center for the first time since March 10, 2020. The Stars went 2-2-0 opening the season on the road, both wins coming after regulation.


The Stars' play following regulation through five games is vastly different from last season. Dallas was 3-8 in games decided in overtime and 2-6 in shootouts.

The Kings went 1 for 6 on the power play, the Stars 2 for 5. ... Dallas coach Rick Bowness said he hopes forwards Jason Robertson (upper body) and Blake Comeau (upper body) can play their first games this season on Monday and defensemen John Klingberg (low body) can return for the first time since being injured in the team's Oct. 14 opener.

Kings: Saturday in St. Louis to finish their first back-to-back this season. It's also first of two in a row in St. Louis.

Stars: Monday at Columbus, their fourth straight road opponent from the East.