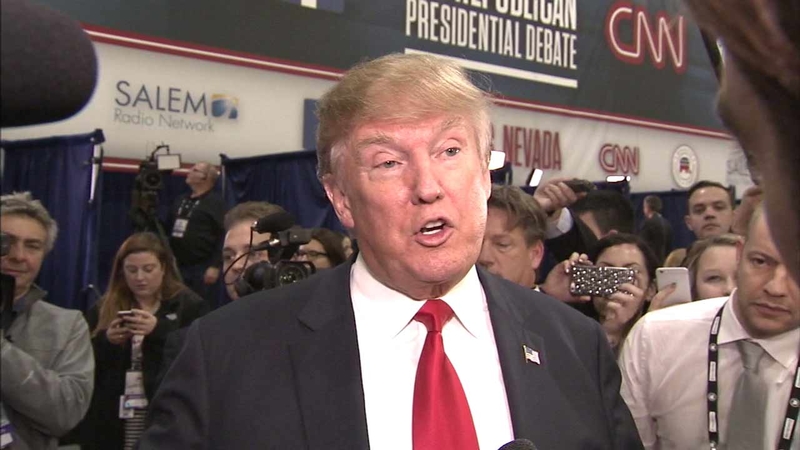 LAS VEGAS (KABC) -- The threat to Los Angeles schools drew national attention on Tuesday as GOP candidates sparred frontrunner Donald Trump and each other during the fifth and final Republican presidential debate.

The national conversation at the debate was dominated by Southern California issues. Other hot-button topics included Trump's plan to temporarily ban Muslims from entering the U.S. This led to the biggest fight yet between Trump and Florida Gov. Jeb Bush.

"Donald, you know, is great at the one-liners, he's a chaos candidate and he'd be a chaos president," Bush retorted.

"Jeb doesn't believe I'm unhinged. He said that very simply because he has failed in this campaign. It's been a total disaster," Trump said.

"Donald, you're not going to be able to insult your way to the presidency," Bush fired back.

Florida Sen. Marco Rubio and Texas Sen. Ted Cruz didn't go after Trump - but after each other.

They disagreed on a bill that makes it harder for the government to collect American's phone records and sparred on Rubio's immigration bill and the president's bill to pay for the military.

"One of the problems with Marco's foreign policy, he has far too often supported Hillary Clinton and Barack Obama, undermining governments in the Middle East that have helped radical Islamic terrorists," Cruz said.

"Hillary Clinton and Barack Obama's strategy is to lead from behind. It sounds like what he's outlining is not to lead at all," Rubio said.

At the top of mind - the San Bernardino shootings and the threat to the Los Angeles Unified School District and resulting school closures.

"The second largest school district in America, in Los Angeles, closed based on a threat. Think about the effect that that's going to have on those children when they go back to school tomorrow," said New Jersey Gov. Chris Christie.

"Every parent is wondering, how do we keep our kids safe?" Cruz said.

After the debate, the recent terror scares in Southern California were a big part of the discussion in the GOP debate spin room.

"I thought it was terrible, frankly, that they closed off the system because you're really catering to whoever it is whoever it is that did it," Trump said. "What we should do is be very vigilant, find out who did that, but I thought, frankly, closing the entire system with those hundreds of thousands of students, that was very, very tough."

Dr. Ben Carson was also asked for his thoughts on the school closure.

"I think there's going to be a lot of overreactions because people feel like that the government isn't reacting appropriately," Carson said.

But Sen. Rand Paul and Carly Fiorina steered clear of criticizing the decision of local authorities.

"I wouldn't second guess the superintendent making the decision. How do you make a decision like that and how do you look back if you made the wrong decision?" Paul said.

"I have no quarrel with their decision to act in an abundance of caution," Fiorina said.

When Trump was told that most of the other candidates disagree with him saying they'd rather err on the side of caution, he said, "That's why I'm No. 1 and they're not."