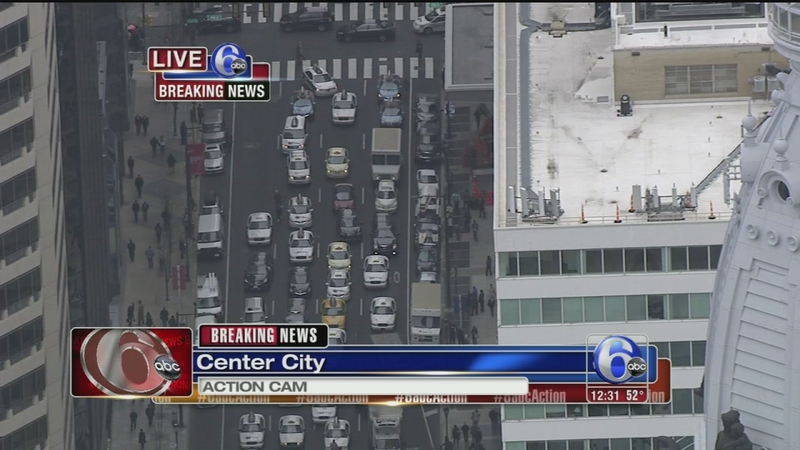 PHILADELPHIA -- More than 100 taxi and Uber Black drivers clogged the streets surrounding City Hall on Wednesday as they protested what they call the "illegal operation" of Uber X and Lyft in Philadelphia.

The protest started around noon, causing a big traffic problem in Center City on the streets leading to and around City Hall.

At one point, some of the cab drivers got out of their vehicles and marched toward City Hall with signs. They said their concerns are public safety and they have invested in licenses, training and other things that Uber X and Lyft ignore.

Taxi and Uber Black drivers also said they pay fees that Uber X and Lyft drivers are not paying.

They called upon city leaders and state officials to intervene to stop the operation of Uber X and Lyft.

By 1:30 p.m. police were clearing the streets so traffic could resume.

A driver was detained and ticketed by Philadelphia Police during Wednesday's protest in Center City.

At least one taxi driver was detained and ticketed during the protest.

Sister station WPVI-TV's chopper was overhead as one taxi was being towed.

Several taxicabs were ordered towed from the scene of a protest in Center City Philadelphia.

A spokesperson for Uber released the following statement on Wednesday:

"Many taxi and limousine drivers are understandably frustrated because the Philadelphia Parking Authority's outdated rules make it harder to earn a living when the public has shown they want more affordable options. Each year, the PPA requires limousine drivers to pay $404 per vehicle for a PPA sticker and $130 for their chauffeur's permit to be renewed. They also subject drivers to obsolete vehicle restrictions and onerous insurance requirements. We believe statewide reform of the PPA that allows for regulated ridesharing will benefit both riders and drivers."

The Southeastern Pennsylvania Transportation Authority said surface bus transportation for all Center City routes were delayed as a result of the demonstration.