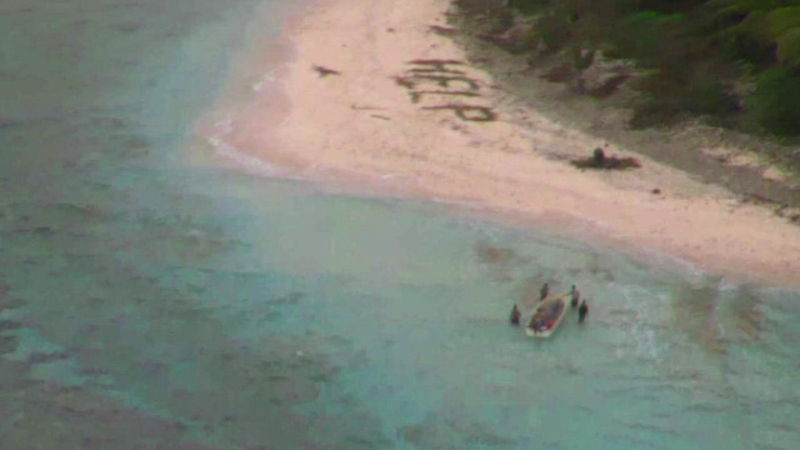 Three real-life castaways are lucky to be alive after what was supposed to be a three-hour tour went very wrong, stranding them for days on a tiny deserted island.

They managed to get rescued in part by spelling out "HELP" with palm leaves on the sand and waving their orange life jackets to catch the attention of a U.S. Navy rescue plane.

The men had set off for a small island in Micronesia to catch a plane, but never made it. Late at night, their boat was taken out by a big wave and sunk in the middle of the ocean. They managed to swim two miles to a tiny, long-deserted island, full of empty fishing shacks, but no means of communication.

"The personal flotation devices allowed them to stay above water, to allow them to make the overnight swim to the island," said Lt. William White, with the U.S. Coast Guard.

When they did not show up as expected a day later, U.S. Navy and Coast Guard rescue crews went out in search of the castaways. Three days after they went missing, a Navy plane spotted the HELP sign on the deserted island called Fanadik. A boat was dispatched from Micronesia and they were safely recovered.

"Ingenuity of these men to build their sign and the preparedness of having lifejackets also contributed to their safe rescue," the Coast Guard said.
Related topics:
water rescuerescueboatingsearch and rescuemissing person
Copyright © 2021 KABC-TV. All Rights Reserved.
More Videos
From CNN Newsource affiliates
TOP STORIES