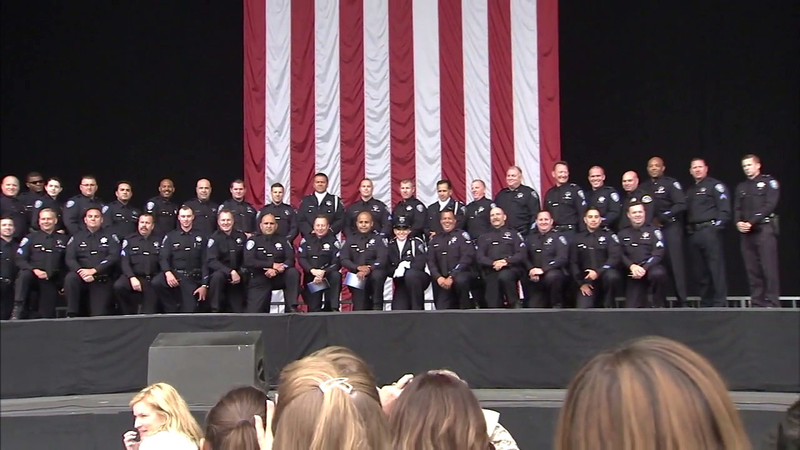 SAN BERNARDINO, Calif. (KABC) -- A special tribute was held to honor emergency crews who heroically responded to the terror shootings in San Bernardino.

It was a day this group of first responders will never forget. The Dec. 2 terrorist attack on the Inland Regional Center. They were honored for their courage and for risking their lives to make sure others were safe.

The ceremony at the San Manuel Amphitheater was filled with family of the men and women in uniform.

An honor guard and fly over opened the award presentation, with California Attorney General Kamala Harris recognizing their heroism.

"That date will go down in history as one of San Bernardino's and California's darkest hours, but it was also California's law enforcement's finest moments," Harris said.

One by one, officers, deputies, firefighters, paramedics, probation officers and dispatchers walked across the stage and received service medals for their work during the attack.

San Bernardino narcotic Officer Nicholas Koahou was shot during a gun battle with the terrorist couple. He received the Medal of Valor and Purple Heart.

"We don't need any of these medals. Our medal or our award was us making it through that day," Koahou said.

Despite the praise and medals, the law enforcement community in attendance remained humbled by their experience.

"The people that really need to be thought about are the people that are out there that had been wounded," said Detective Brad Phillips with the San Bernardino County Sheriff's Department.

Not to be forgotten - the 14 lives lost and the 22 other victims wounded in the attack.

"Their families and all the employees who were affected by this terrorist attack can never be forgotten," said Sheriff John McMahon.

The ceremony brought together 11 different agencies with awards going out to 134 first responders to the terrorist attack.