Derek Watt pick by Bolts gets thumbs up from big brother J.J. 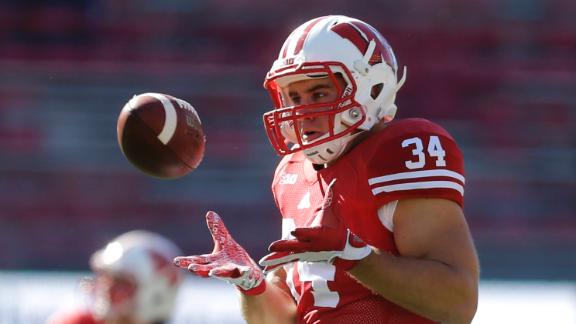 SAN DIEGO -- In need of a fullback to help ignite a struggling running game, the San Diego Chargers added a familiar name in NFL circles by selecting former Wisconsin fullback Derek Watt with the No. 198 overall selection in the sixth round of the NFL draft Saturday.

Watt, of course, is the younger brother of Houston Texans star J.J. Watt, the three-time NFL Defensive Player of the Year. The elder Watt tweeted his congratulations soon after the pick was announced.

The two could meet Nov. 27, when the Chargers travel to Houston to face the Texans.

"It will be a special day to play J.J.," Derek Watt said. "We've never had that opportunity. It'll be interesting."

Watt joins former Badgers teammate Melvin Gordon, a running back, in San Diego's backfield. Gordon was a first-round pick of San Diego in 2015.

"Melvin has already texted me a few times today," Watt said. "We jell tremendously on the field. We're going to pick up where we left off [at Wisconsin]."

The Chargers averaged a league-worst 3.5 yards per carry last season. Gordon struggled as a rookie, finishing with 641 yards and no touchdowns in 14 games before being shut down with a knee injury that required surgery.

Chargers general manager Tom Telesco had said he wanted to add a fullback through the draft to help improve the running game in 2016.