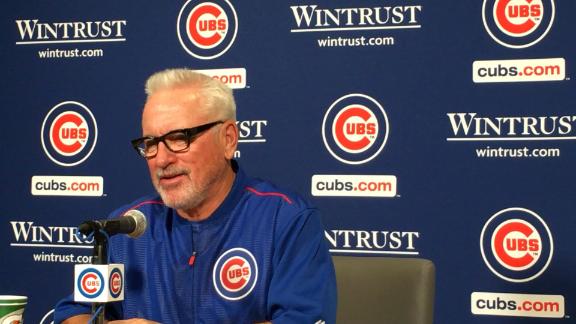 Maddon said he doesn't think he did anything wrong.

"There's really nothing to react to," Maddon said Monday afternoon. "If you're a Cubs fan you love it. If you're not, you don't, necessarily.

"It was a strategy in the game based on how they built their group. ... The best I way I can put it is, 'I didn't do anything to them.'"

Maddon seems to be putting the issue back on the Nationals, who batted the league's leading hitter at the time, Daniel Murphy, two spots below Harper, perhaps not affording him proper protection.

The Cubs chose to pitch instead to Ryan Zimmerman, whowent 1-for-7 in the 13-inning loss Sunday, leaving 14 men on base. Zimmerman was right back in the cleanup spot, in between Harper and Murphy, on Monday against Detroit.

"Do I tear up my whole lineup for three days?" manager Dusty Baker said before taking on Detroit. "I think people are panicking a little early here. Early to me. I'm sure it's been the subject of discussion.

"I've been at this a long time. Everybody's got an opinion on what my lineup ... should be. In the meantime, I'll make out the lineup."

The Cubs gave no credence to complaints regarding their strategy of taking the opposition's best hitter out of the game.

"No one goes to a football game and complains that Calvin Johnson got double-teamed," Cubs general manager Jed Hoyer said, referring to the retiredDetroit Lionsreceiver. "It's part of the game. You try to take away the strength of another team's best player."

The Cubs insist they didn't enter the series intending on walking Harper 13 times but said the games, especially Sunday, dictated it. Harper twice came to bat in extra innings with two runners on and two outs with the score tied. Both times he was walked intentionally.

"He kept on coming up with a base open and two outs," Hoyer said. "He's a great player. The guy can end the game quickly, so we were probably more careful than usual. Ultimately, it's a sign of respect for Bryce that that was the chosen avenue."

Some disagreed, including Nationals pitcher Tanner Roark, who called it "scared" baseball. Again, Maddon put the onus on the Nationals for not taking advantage of the situation.

"There's nothing I did," Maddon said. "It happens every day."

The strategy worked. Zimmerman kept making outs, and the Cubs eventually won on a walk-off home run by Javier Baez. They knew it would create a stir.

"We didn't go into the series saying, 'We're going to walk him a bunch of times,'" Hoyer said. "The game situations dictated it to an unbelievable level.

"Managing along with Joe, I agreed with all of them but knew it would be a topic of conversation."