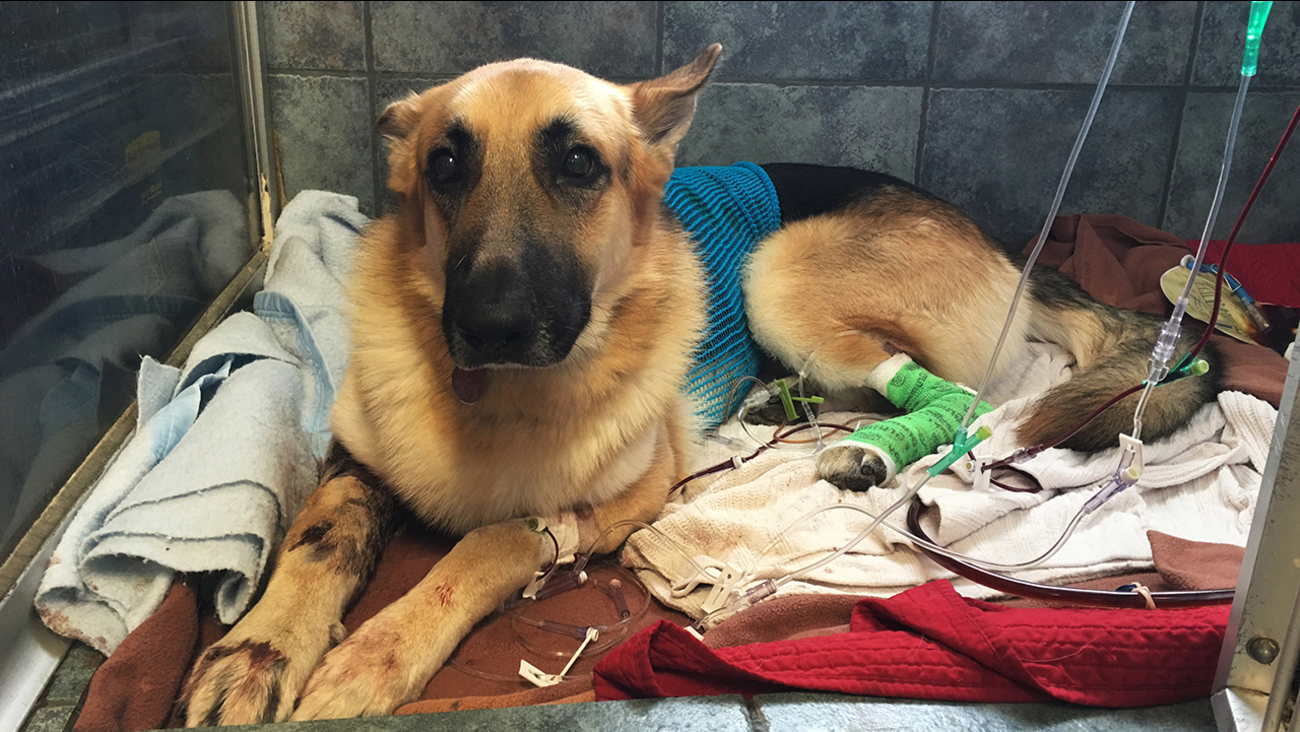 TAMPA, Fla. -- When a venomous Eastern diamondback rattlesnake appeared in the backyard of a 7-year-old girl, her German shepherd came to her rescue, refusing to back down even when the snake bit him three times.

In short, Haus is a hero.

"It shows you that a rescue dog, for us, paid it forward by protecting my family," said Adam DeLuca of Tampa.

Now hundreds of donors are coming to the family's rescue, quickly topping the goal of $15,000 Friday on a GoFundMe account to help pay for the antivenin needed to keep the dog alive. By Friday afternoon, $35,000 had been raised for the dog's care.

Haus is still recovering in the Intensive Care Unit of Tampa's Blue Pearl Emergency Veterinary and Specialty Hospital, and is being treated with anti-venom and painkillers, said Dr. John Gicking.

"Without the pain medication, he's in pain. He's responsive, he's alert, and his leg is swollen and uncomfortable," the doctor said.

Molly DeLuca's grandmother was watching her play with the 2-year-old shepherd in their backyard when the dog suddenly jumped in front of the girl and reared up several times. It wasn't clear what happened at first, but they could tell Haus was bleeding, and brought him to the vet.

When his leg was shaved, three bite marks could be seen - telltale signs of the rattlesnake.

The family lives near a state park that is a habitat for rattlesnakes and cottonmouths, and dangerous critters can slip under their fence from the wilderness, her father said.

The snake's venom damaged the dog's kidneys. Vets now expect a full recovery, but it won't be cheap: Each day in the ICU costs between $1000 to $1500, and each vial of anti-venom costs $618. Haus is averaging 4 or 5 vials per day as the poison leaves his system.

A family friend started the fundraising effort. The response, said DeLuca, has been "overwhelming."

Haus is expected to be hospitalized for another couple of days. The family plans to forward any unused donations to a local rescue organization.

The family adopted Haus just two months ago from a rescue organization, but they already had no doubt he would risk his life to save Molly or her four-year-old brother.

"He just exceeded our expectations all the way around," said DeLuca. "Right away, the kids were hugging and loving on him, he always took it, he never did anything. Whenever anyone came to the door, he would start barking and try to be protective. He has just been an amazing dog. He's the type of dog that when you want to go buy a dog, you pay thousands of dollars and that's the dog you get. But we adopted him and got him for free."
Related topics:
floridadogsheroanimal newssnakedoganimal attacku.s. & world
Copyright © 2021 by The Associated Press. All Rights Reserved.
TOP STORIES
California now only state at 'moderate' COVID transmission level
Chase of stolen-vehicle suspect ends in Buena Park
SoCal parents, teachers rally against student vaccine mandate
Ridley-Thomas will 'step back' from LA City Council
Some IATSE members blast contract deal, vow to vote no
Gabby Petito's parents speak out about Brian Laundrie
LAPD releases video of North Hills crash that killed 18-month-old
Show More
Supply chain now leading to empty shelves at grocery stores
Arson suspected in Pasadena fires
Rising sea levels could submerge Santa Monica Pier
'Ghost gun' seizures in LA have increased 400% since 2017
3 burned in fire at Canoga Park marijuana grow operation
More TOP STORIES News