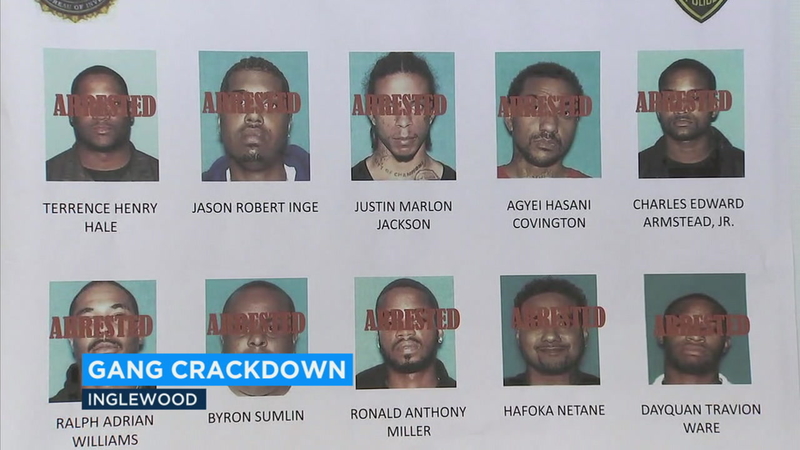 INGLEWOOD, Calif. (KABC) -- Federal and local authorities announced the arrests of 14 members of an Inglewood street gang that was allegedly involved in guns and drugs in 10 states.

The Family gang was described as a violent organization that was involved in trafficking of firearms, cocaine, ecstasy and methamphetamine. They had connections with other organizations throughout the country.

Officials say federal drug task force members working with Inglewood police were able to make the arrests after undercover officers made purchases of guns and drugs from gang members.

Most of the suspects were arrested within the past week and were charged in a series of six indictments returned by a federal grand jury in Los Angeles.

FDA authorizes Pfizer's COVID-19 vaccine for ages 12 to 15
Get paid to take a nap for new study
Mother Day's party in Hollywood turns deadly after shooting
Bill and Melinda Gates divorce was in the works for 2 years
Tiger roaming Houston neighborhood owned by man on bond for murder
Show More
Great Wolf Lodge in OC has 200 jobs up for grabs
Fauci: It may be time to relax indoor face mask mandates
Newsom declares drought emergency for 39 CA counties
Caitlyn Jenner: CA immigrants should have path to citizenship
Another shooting reported on SoCal roads
More TOP STORIES News