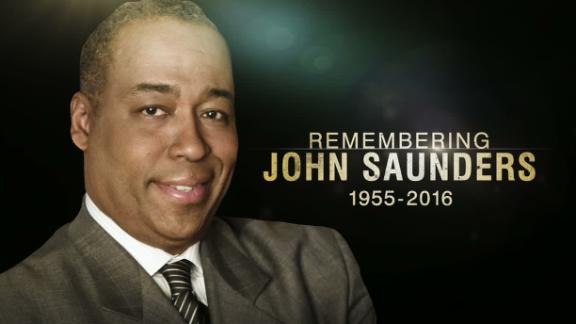 John Saunders, one of the familiar on-air faces of ESPN for nearly 30 years, has died. He was 61.

Saunders hosted studio and play-by-play programming. He covered college football, basketball and the NHL for the network, in addition to anchoring SportsCenter. He was also host of The Sports Reporters.

Born in Canada, Saunders was an all-star defenseman in the junior hockey leagues of Montreal and played at Western Michigan before becoming one of the most prominent broadcasters of his time.

Saunders was a founding member of The V Foundation for Cancer Research and served on the board of directors.

"John was an extraordinary talent and his friendly, informative style has been a warm welcome to sports fans for decades," said John Skipper, president of ESPN and co-chairman of Disney Media Networks, in a statement. "His wide range of accomplishments across numerous sports and championship events is among the most impressive this industry has ever seen. More importantly, John was a beloved and devoted family man who cared deeply about people and causes, as evidenced by his long-standing efforts as a passionate board member for The V Foundation for Cancer Research.

"He was one of the most significant and influential members of the ESPN family, as a colleague and mentor, and he will be sorely missed. Our thoughts are with his loved ones at this extremely difficult time."

Saunders joined ESPN in December 1986 to anchor SportsCenter. But he became a voice on college basketball and the WNBA and hosted ESPN's coverage of the Stanley Cup playoffs from 1993 to 2004. He also worked on coverage of the World Series and Major League Baseball All-Star Game.