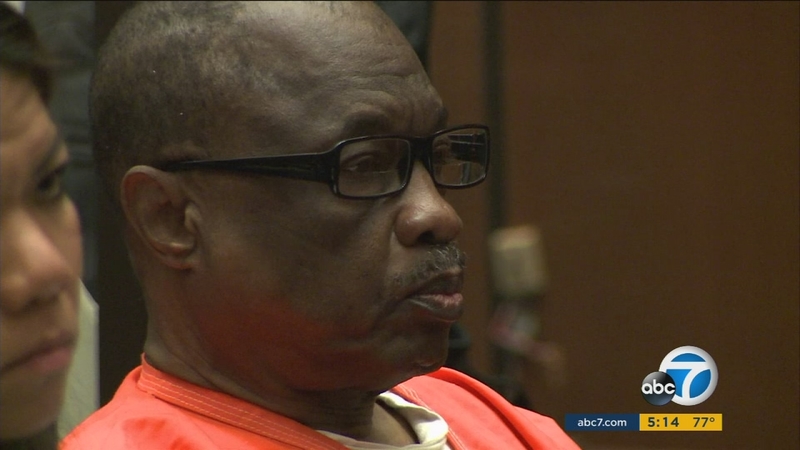 LOS ANGELES (KABC) -- Convicted serial killer Lonnie Franklin Jr., known as the "Grim Sleeper," was formally sentenced to death for the murders of nine women and a teenage girl over two decades in South Los Angeles.

In June, a jury recommended execution rather than life in prison. On Wednesday, Judge Kathleen Kennedy agreed with the jury's recommendation and declined the defense's request for a new trial.

"I can't think of anyone I've encountered in all my years in the criminal justice system that has committed the monstrous crimes that you have," Kennedy said.

Franklin sat upright and attentive throughout the trial, rarely speaking with his lawyers and showing no emotion as the verdicts were read. None of his family showed up in court.

Family of the victims cried as the death penalty was handed down.

"You didn't just take anyone off the street, you took someone who was really loved," Jovana Peters, the sister of Janecia Peters said in the courtroom.

The mother of Alicia Monique Alexander demanded Franklin turn around and look at her, and asked him why he shot and strangled her daughter.

Franklin mouthed to her, "I don't know ma'am."

According to prosecutors, the 63-year-old stalked and killed nine women and a 15-year-old girl in South L.A. during the crack epidemic.

Authorities said Franklin, a former mechanic and sanitation worker, targeted prostitutes. Most of the victims were found with traces of cocaine in their systems.

Prosecutors applauded the death penalty handed down, but said it's another issue actually carrying out the sentence, as 764 inmates already await execution on California's death row.

Following his sentencing, Franklin was ordered to report to San Quentin State Prison within the next 10 days.