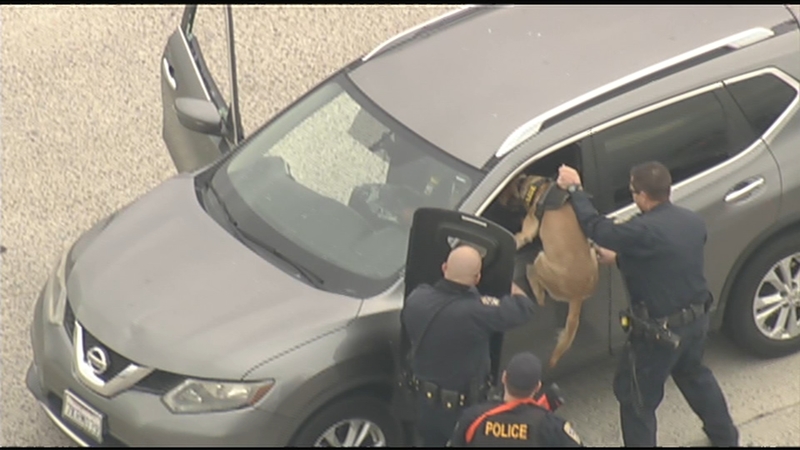 ONTARIO, Calif (KABC) -- A police dog helped subdue a suspect after a lengthy standoff on the 15 Freeway in Ontario that left traffic backed up for miles.

The stolen-car suspect had stopped on the northbound 15 and refused to exit his vehicle after a chase from the Azusa area.

After negotiating for some time, officers sent in a K-9, who leaped through the vehicle's window and latched onto the suspect's arm. The suspect continued to resist and fight off the dog but eventually multiple officers approached the vehicle and were able to take him into custody.

A police dog helped subdue a suspect after a lengthy standoff on the 15 Freeway in Ontario that left traffic backed up for miles.

Traffic was blocked off on the northbound side near Fourth Street. Traffic on the southbound side was open but slower as passing drivers watched the drama.

The incident began just before 1 p.m. as Azusa police began pursuing a stolen-car suspect. The suspect fled eastbound on the 10 Freeway through the San Gabriel Valley into the Inland Empire, heading north on the 15.

The suspect then stopped on the freeway near 4th Street in Ontario, but refused to come out of the vehicle. Authorities blocked off the freeway on that side as they negotiated with the suspect for more than 10 minutes before sending in the dog.

After a chase from the Azusa area, a stolen-car suspect stopped on the 15 Freeway in Ontario and refused to come out until a police dog was deployed.