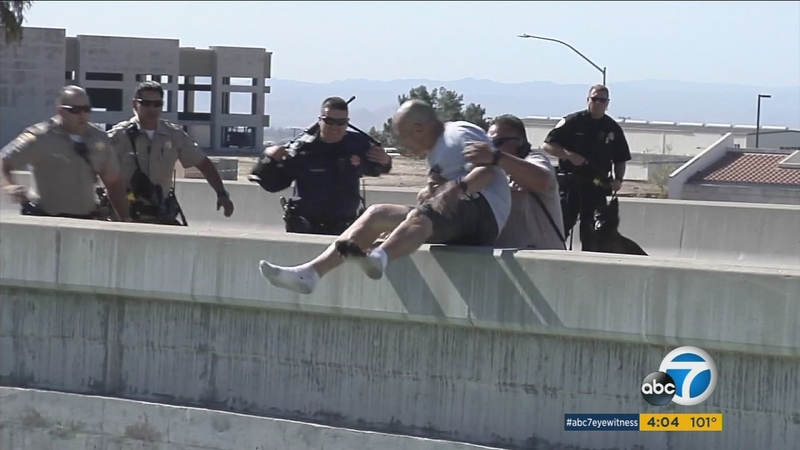 SAN BERNARDINO, Calif. (KABC) -- A standoff with a chase suspect came to an end on a 215 Freeway overpass in San Bernardino on Monday.

The suspect, later identified as 51-year-old Edward Nader of Los Angeles, was reportedly in a stolen vehicle when he led police on a high-speed chase across multiple counties in Southern California, officials stated.

According to authorities, the initial call came from the Riverside County Sheriff's Department near the Morongo Reservation at about 8 a.m.

Officers with the California Highway Patrol caught a chase suspect on a 215 Freeway overpass before the man could jump.

Deputies said the call was for a suspicious vehicle and when officials completed a records check, they said the black sedan came back as stolen.

Authorities said Nader drove along the westbound 60 Freeway, then onto the northbound 605, then onto the eastbound 10 Freeway through Baldwin Park and West Covina at speeds of up to 100 mph.

At one point, Nader was seen throwing items out of the window on the freeway, according to officials.

Nader remained on the 10 Freeway, driving into Pomona, Montclair, Ontario then Fontana. CHP's Inland Division took over the chase at that point.

Police said Nader continued to speed eastbound on the 10 Freeway through Bloomington, Rialto and into Colton.

He then drove onto the northbound 215 Freeway into San Bernardino.

Nader pulled over and exited the vehicle near Palm Avenue and walked toward an overpass on the 215 Freeway in San Bernardino.


He was carrying a metal object, about 4-feet long, and appeared to be threatening to jump off the overpass as officers approached him.

Officers shot Nader with less than lethal force, either rubber pellets or bean bags, in an attempt to get him to surrender.

After several minutes of discussions with Nader, officers were able to grab him from a ledge on the overpass and take him into custody.

"At the time I saw that he was distraught, he wanted to do something to himself, so I just put it upon myself," explained Officer Reynaldo Avalos, who was the first officer to grab the suspect and pull him from the ledge. "Luckily they were distracting him and I was able to get close enough to where I could grab him."

Nader appeared was taken to the hosptial, but the extent of his injuries was unknown. CHP said he would be booked for several crimes, including driving under the influence of drugs.