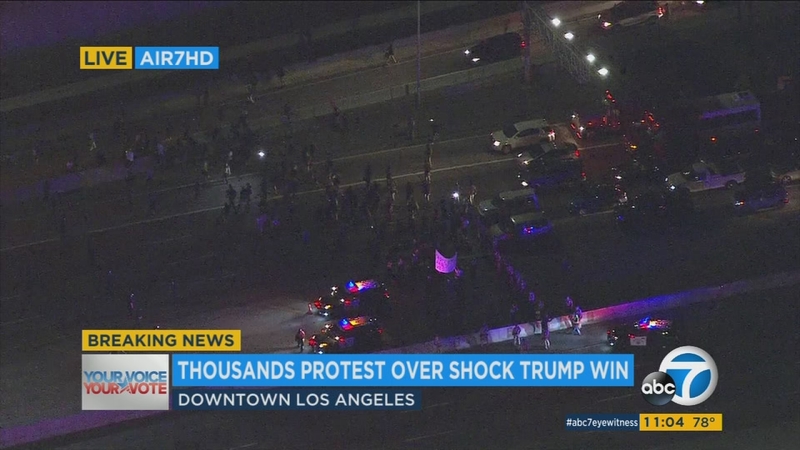 LOS ANGELES (KABC) -- Thousands of demonstrators gathered in downtown Los Angeles late Wednesday to protest the election of Donald Trump, spilling out past city streets to block traffic on the 101 Freeway.

The chaotic scene was one of many around the country, where thousands took to the streets to protest Trump's stunning upset in Tuesday's presidential election.

In Los Angeles, thousands of people first massed peacefully near City Hall, blocking one side of the street, holding signs and chanting "Not my president."

Later in the evening as the crowds grew to the thousands, they spilled out onto the 101 Freeway near downtown, shutting it down in one direction as police then blocked lanes on the other side.

Some motorists were stuck in their cars for hours, as protesters filed past them. By midnight, police were letting some of the stuck vehicles on the southbound side leave, but the freeway remain closed overall in both directions.

Police made at least 13 arrests as they began trying to stop more protesters from entering the freeway.

They also burned a large pinata designed to look like Trump's head.

Several hundred protesters also gathered in Santa Ana, where some shot off fireworks and threw bottles and rocks at police.

Hundreds of people in Santa Ana protested the election of Donald Trump.

American flags were also burned in Portland and at American University in Washington D.C.

There were similar protests held election night after it became clear that Trump had confounded the pollsters and delivered an upset victory, sweeping most of the battleground states against all expectations.

Hundreds of students at UCLA and UC Irvine took to the streets to protest the results.