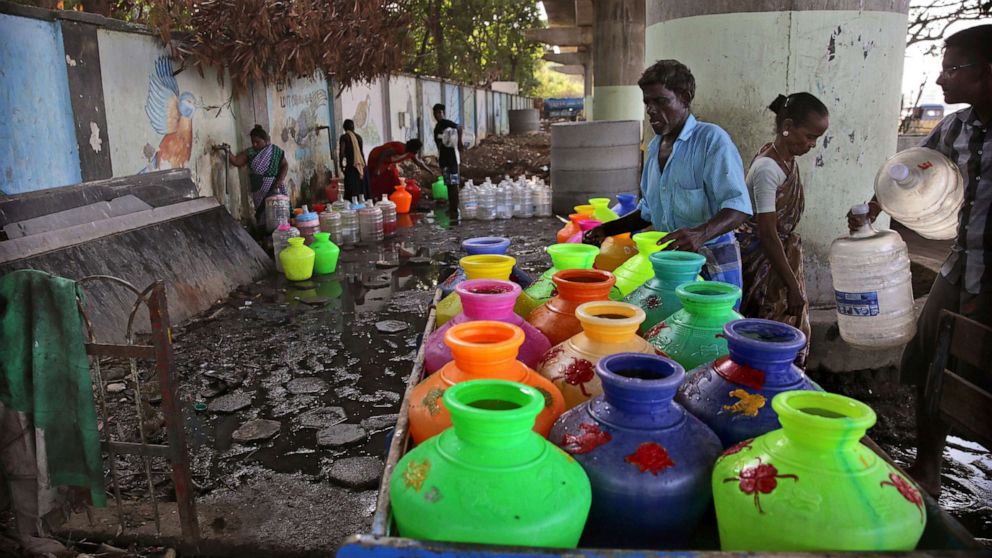 ABCNews
By JULIA JACOBO
Seventeen countries -- home to 25% of the global population -- are facing "extremely high" water stress, according to the The World Resources Institute, a research non-profit.

Several drought-stricken places around the world have experienced water crises in recent years, with populated cities like Cape Town, Sao Paolo and Chennai inching toward "Day Zero," the day when taps run dry and water is no longer available.

In the 17 countries facing water risk, from India to the Middle East to North Africa, agriculture, industry and municipalities are sucking up 80% of the available surface and groundwater every year, according to WRI's Aqueduct Water Risk Atlas, a tool that ranks water stress, drought risk and riverine flood risk across 189 countries.

This means that even "small dry shocks," which the nonprofit says will likely increase due to climate change, can produce "dire consequences."

"Water stress is the biggest crisis no one is talking about," WRI president and CEO Dr. Andrew Steer said in a statement. "Its consequences are in plain sight in the form of food insecurity, conflict and migration, and financial instability."

The most water-stressed regions on Earth are the Middle East and North Africa, also known as the MENA region, and home to 12 of the 17 at-risk countries. This region could experience the greatest economic losses from climate-related water scarcity, between 6% and 14% of GDP by 2050, the World Bank found.

One possible solution could be to harness the wastewater in this area, 82% of which is not reused to generate a new source of clean water.

India ranks 13th on the Aqueduct list of water-stressed countries, but has more than three times the population of the other 16 countries combined, according to WRI.

While Chennai in southeast India is in danger of its reservoirs drying up, Northern India faces severe groundwater depletion, according to WRI.

"The recent water crisis in Chennai gained global attention, but various areas in India are experiencing chronic water stress as well," said Shashi Shekhar, former secretary of India's Ministry of Water Resources and senior fellow of WRI India. "India can manage its water risk with the help of reliable and robust data pertaining to rainfall, surface and groundwater to develop strategies that strengthen resilience."

The Indian government is taking critical steps to alleviate the crisis, including placing all water issues -- including supply, drinking water and sanitation -- under one government umbrella. The WRI said the country can also pursue more efficient irrigation, collect and store rainwater, and conserve and restore lakes, floodplains and groundwater recharge areas.

More than a billion people currently live in water-scarce regions, and as many as 3.5 billion could experience water scarcity by 2025, according to WRI. Smaller pockets of extreme water stress even occur in countries with relatively low water stress overall.

Global water crises are stemming from more than just drought. Increasing populations degrade freshwater and coastal aquatic ecosystems, and WRI found that global water withdrawals have more than doubled since the 1960s due to growing demand -- with no signs of slowing down.