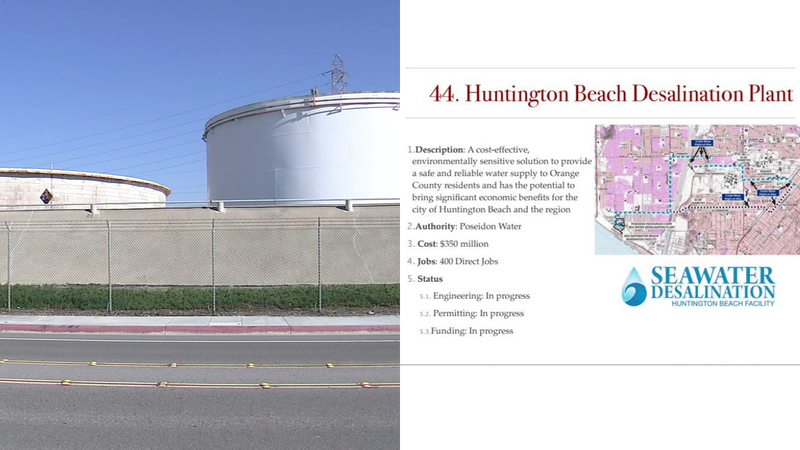 HUNTINGTON BEACH, Calif. (KABC) -- A proposed desalination plant in Orange County could get a boost from President Donald Trump's administration, but not everyone is happy about that.

The Poseidon Water Company has wanted to build the Huntington Beach Desalination Project, but it has been tied up in red tape for more than a decade.

The proposed desalination plant popped up on an allegedly leaked Trump administration list of 50 infrastructure projects.

Opponents of the project said the state has shot down the plans for the past 17 years because it's environmentally unsound and too expensive to desalinate water.

"If desalination was easy and cheap there'd be desalination plants all up and down the coast and there aren't," Ray Hiemstra said.

Hiemstra works with the clean water advocacy group Orange County Coastkeeper. He said Trump's proposal was littered with inaccuracies, including the cost, which was listed in the leaked document at $350 million.

"It's a $1 billion plant," Hiemstra said, citing an estimation from the Orange County Water District.

Along with the cost, Hiemstra said the plant would have a negative impact on the environment.

"This is going to use a huge amount of energy, producing greenhouse gases, adding to climate change, it also kills marine life, pollutes our water," he explained.

The Poseidon Water Company turned down the opportunity for an interview with ABC7, but sent the following written statement:

"Since its inception in the early 2000's, the Huntington Beach Desalination Project has enjoyed bipartisan support from our state and federal officials, including Senator Dianne Feinstein and former Senator Barbara Boxer. Any federal financial support will lower the consumer cost of water. We look forward to working with the new administration, and continuing our efforts with Governor Brown and our local, state, and Congressional leaders to bring this locally controlled, drought-proof and environmentally-sensitive water supply on line."
Coastkeeper said it doesn't foresee the desalination plant rising in California anytime soon.

"The permits that the Poseidon plant needs, the major permits are all state permits and I think our governor has been pretty clear that we're not just going to be taking orders from Washington," Hiemstra said.
Related topics:
politicshuntington beachorange countyenvironmentwaterwater conservationcalifornia waterpresident donald trumpdrinking waterjerry brown
Copyright © 2021 KABC-TV. All Rights Reserved.
More Videos
From CNN Newsource affiliates
TOP STORIES