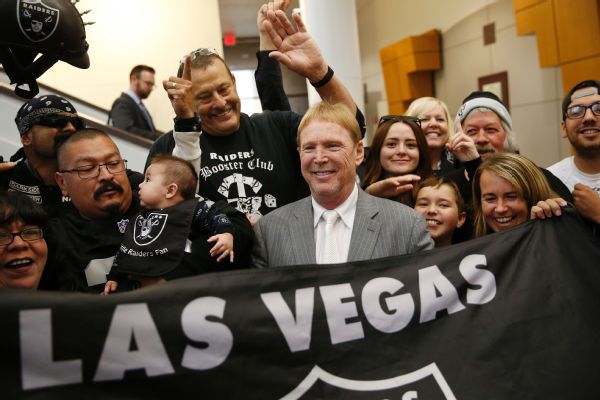 TheOakland Raiderswant to shoulder an additional$650 million for their proposed Las Vegas stadium, bringing their total commitment to $1.15 billion for a deal in which they would also accept operation responsibilities and risk.

Nevada Gov. Brian Sandoval's office said a lease-agreement proposal submitted last week expressed the new particulars of the desired deal, which also asks that the Raiders to pay $1 a year in rent.

Billionaire casino mogul Sheldon Adelson pulled out of the deal on Monday, having previously committed the $650 million.

A source told ESPN's Darren Rovell that the Raiders' relocation application to the NFL filed on Jan. 19 also did not include Adelson.

Team officials had said they were enlisting investment bank Goldman Sachs to help in the $1.9 billion project that includes a domed stadium to be built at a site yet to be decided, probably just off the Las Vegas Strip. It would seat65,000.

Adelson played an instrumental role in the effort to lure the Raiders, which eventually grew into a $750 million commitment of taxpayer money to the deal. The Raiders had promised $500 million.

In a statement, the Raiders acknowledged Adelson's involvement in the project over the past year and promised to make good on owner Mark Davis' vow to move to Las Vegas.

Adelson, the chief executive of Las Vegas Sands Corp., declared that he had been shut out of talks that led to the lease document presented to the Clark County Stadium Authority.

The Las Vegas Review-Journal, which is owned by the Adelson family, reported Davis had been in Adelson's office "negotiating with the family" even as Raiders president Marc Badain and executive vice president Dan Ventrelle were making a presentation to the authority board on the proposed lease agreement on Thursday.

Adelson's withdrawal means the Raiders will go forward with a decision pending from NFL owners, who must approve the move. But the Raiders now won't have to ask team owners to waive a rule prohibiting casino operators from having ownership roles in teams.

Clark County Commission chairman Steve Sisolak, who has been intimately involved in the stadium and Raiders plan, characterized Adelson's departure as "a significant setback ... unless Goldman Sachs has someone lined up to step into Adelson's place."

"I do not know how the other owners are going to react to this," Sisolak said.

Sands owns the Venetian and Palazzo resorts and a convention center on the Las Vegas Strip, as well as several casinos in the Chinese gambling enclave of Macau. Adelson is a big backer of Republican Party causes.

"It's clear the Raiders have decided their path for moving to Las Vegas does not include the Adelson family," Adelson's statement said. "So, regrettably, we will no longer be involved in any facet of the stadium discussion."

Stadium Authority chairman Steve Hill, who also serves as Sandoval's development chief, vowed to "continue to ensure the stadium project is developed in a manner consistent with the clear direction of Nevada lawmakers."

The plan isn't only to bring an NFL franchise to Nevada, but to build a stadium for UNLV football "and enhance our state's core tourism economy," Hill said.

Sandoval, a Republican who called lawmakers into a special session to approve tax funding for the project, thanked the Adelson family "for their role in bringing a publicly owned stadium to Las Vegas."

"It is unfortunate that they were unable to come to terms with the Raiders," the governor said.

Sandoval added that terms of the law passed to fund the public portion of the project won't change, "and the state's contribution will not increase as a result of this announcement."