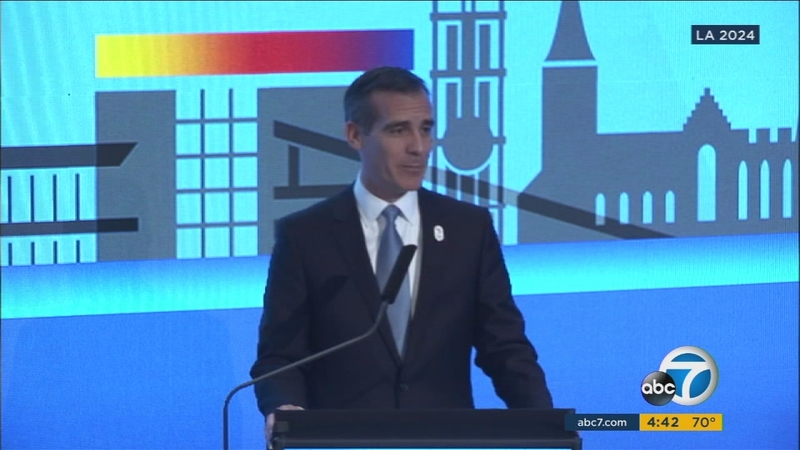 AARHUS, Denmark (KABC) -- Mayor Eric Garcetti delivered remarks to an International Olympic Committee conference in Denmark on Tuesday as part of an ongoing effort to bring the 2024 summer games to Los Angeles.

Speaking at the SportAccord Convention in Aarhus, Garcetti said L.A. can offer "something creative and new - not more of the same" - a critique of Paris, which is also vying to be chosen as host city.

As part of a 12-member delegation, the mayor gave a 10-minute presentation to the General Assembly of the Association of Summer Olympic International Federations. Other members of the delegation include LA 2024 Chairman Casey Wasserman, CEO Gene Sykes and Chief Strategy Officer Angela Ruggiero.

"It's important we draw a distinction in our vision here today, because although many believe the two bids in this race are quite similar, they are, in fact, very different," Garcetti said, drawing a contrast between Los Angeles and Paris, whose delegation also delivered remarks at the meeting.

"First, we don't have to build a single permanent new venue," he continued. "That's very important because it means a no-risk, no-surprises budget. Next, we can harness the 100 million people under 25 in America and the power of our $250-billion sports market for your sports."

Tuesday's event was one of only three such remaining opportunities for LA 2024 to make its case for the Olympic bid.