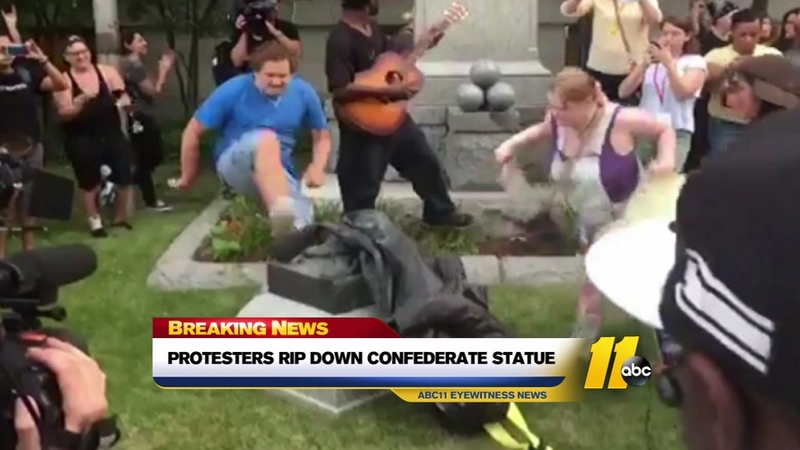 DURHAM, N.C. -- Protesters in Durham, North Carolina rushed and toppled a Confederate statue outside the courthouse on Monday evening.

The monument of a Confederate soldier holding a rifle was erected in 1924 and inscribed on it are the words "in memory of the boys who wore the gray."

MORE: Protestors rip down statue of Confederate soldier. Monument has stood since in @DurhamCounty since 1924. @ABC11_WTVD pic.twitter.com/4MjFXsxS18

The crowd was initially small but steadily grew to include more than 100 people.

Durham protest started off small but vocal and grew as the evening went on.

As the crowd became more animated, several protesters approached the monument and threw some sort of nylon rope around it, eventually pulling the statue of the soldier to the ground.

Protesters storm and tear down the Confederate monument.

After the statue fell, many of the protesters kicked and stomped it.

Protesters then moved on to walk down to Roxboro Street at Main Street, where they blocked the intersection. The protesters later marched to the site of the new Durham Police headquarters, which is under construction.