Dodgers' Yu Darvish pulled as precaution due to tightness in back 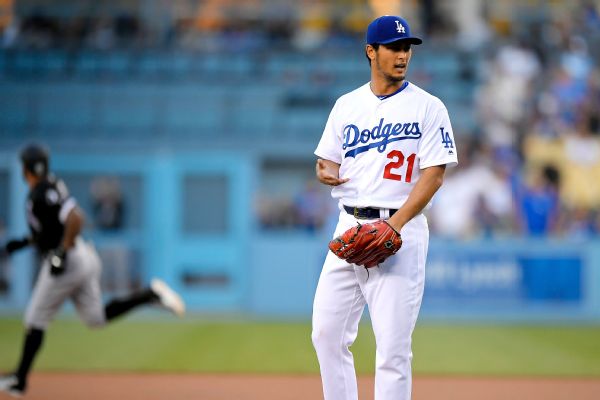 Yu Darvish made his home debut for theDodgers while pitching on his 31st birthday Wednesday night, but he didn't figure into Los Angeles' 5-4 comeback win over the White Sox.

Darvish got a no-decision after pitching six innings and leaving with Chicago up 3-2. Afterward, he said he was pulled because his back was bothering him.

Darvish said he first felt tightness in his back last week in his start at Arizona. Ace Clayton Kershaw is already on the disabled list because of a bad back.

"Between innings, I talked to Kershaw, and he asked me, 'How do you feel?' '' Darvish said through an interpreter. "I told him, 'I feel something in my back,' and he said, 'We need you really bad in six weeks.'

"I was getting tight, so I talked to Doc [manager Dave Roberts], and he just said, 'Let's play it safe.' "

Darvish gave up three runs and eight hits in his six innings. He struck out a career-low two and walked one in his third game for his new team since being acquired in a deadline deal from Texas last month.

He had struck out 10 in each of his first two starts but didn't record his first one against the White Sox until the sixth inning.