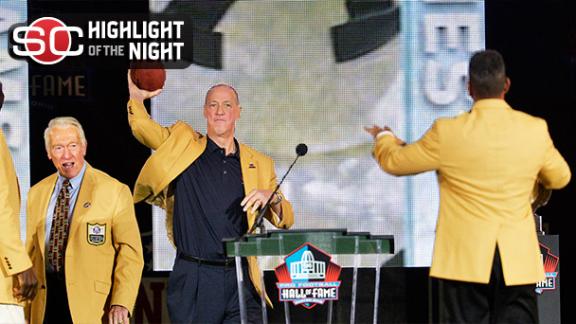 CANTON, Ohio -- After delivering an emotionally charged speech that brought both laughter and tears, receiver Andre Reed had one more thing to do to make his Pro Football Hall of Fame induction complete.

Turning his back to the crowd at the podium, Reed caught a pass from former Buffalo Bills teammate and fellow Hall of Famer Jim Kelly on the stage at Fawcett Stadium on Saturday night.

The two then shared a long, emotional hug.

It was a fitting finish for a tandem that set a then-NFL record by hooking up 663 times in Buffalo.

And it was a moment that paid homage to the quarterback, who has spent the past 14 months battling cancer.

"You taught us not to quit," Reed said, referring to Kelly. "You have endured a lot in your life. The loss of your son, and most recently your battle with cancer.

"You're an inspiration to all you touch."

Kelly was near tears, and the thousands of Bills fans in the crowd cheered.

Even louder cheers went up when Reed delivered a message to any Bills prospective ownership group having an intention of buying and relocating the franchise.

"Oh yeah, and the Bills will stay in Buffalo, too," Reed said.

The Bills are on the block after founder and Hall of Fame owner Ralph Wilson died in March.

A persistent drizzle fell for much of the afternoon before finally letting up at about 4 p.m., about three hours before the start of the induction ceremony.

As expected, there were numerous Bills fans in attendance.

Officials actually moved the ceremony from the front steps of the Hall of Fame building to the stadium in 2002 to make room for the number of Bills fans that traveled to Canton for Kelly's induction.

The ceremony has been held inside the stadium ever since.

And it was Kelly, who received a lengthy standing ovation when he was introduced among the Hall of Famers attending the ceremony. Even Kelly's fellow Hall of Famers stood and clapped on stage.

The applause lasted so long that Kelly attempted to urge fans to sit down. When that didn't work, he then approached ESPN broadcaster and master of ceremonies Chris Berman and gave him a big hug at the podium. 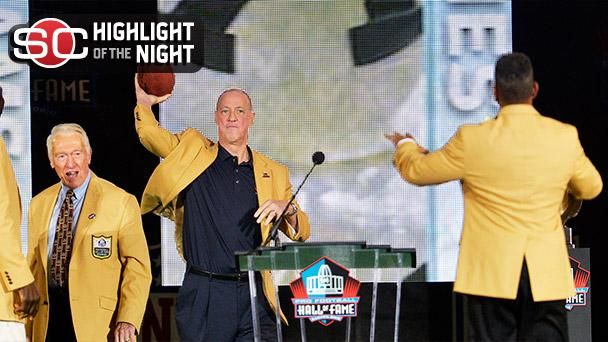