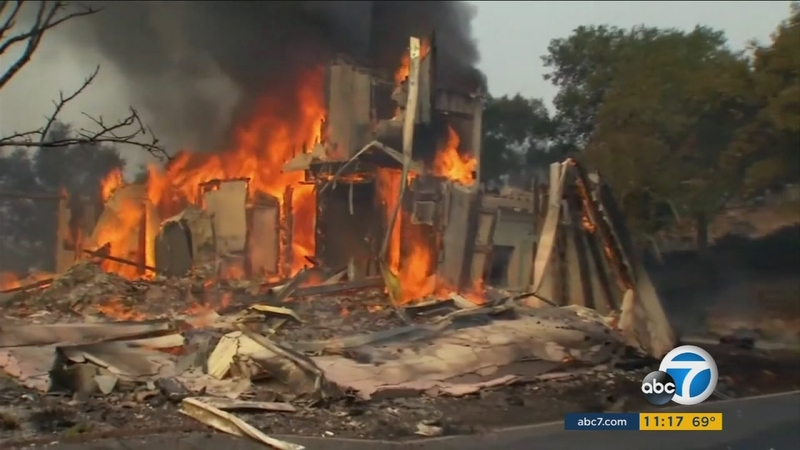 NAPA, Calif. -- Ten people have been confirmed dead and at least 1,500 structures have been destroyed in fires raging in California wine country, according to a CalFire chief.

California Department of Forestry and Fire Protection Director Ken Pimlott said numerous people have been injured and a number of residents are also missing as 14 large fires burn across eight counties and 57,000 acres.

A Northern California county says it has received more than 100 missing-person reports as family and friends scramble to locate loved ones while wildfires ravage the state.

Scott Alonso, communications director for Sonoma County, says the reports have come via calls to a hotline the county set up for the missing.

It is possible that many or most of the missing are safe but simply can't be reached because of the widespread loss of cell service and other communications.

Pimlott called the estimates of destroyed structures very conservative. He said the fires are burning throughout an eight-county swath of Northern California, including Napa, Sonoma and Yuba counties.

Among the burned structures were dozens of houses at a mobile home park that were destroyed in a 20,000-acre brush fire in Santa Rosa, which is one of several out-of-control fires burning in Northern California.

The fires are believed to have begun late Sunday night near Highway 128 in Napa County and progressed toward Santa Rosa city limits.

The fires forced the closure of all public schools in Santa Rosa and Calistoga on Monday. The Tubbs Fire triggered the evacuation of Kaiser Permanente in Santa Rosa. Workers quickly moved patients to other nearby hospitals.

Another hospital in the area, Sutter Hospital, was also placed under evacuation orders.

A 4,500-acre blaze in Mendocino County triggered the closure of multiple roads along the 101 Freeway. The blaze has also crossed the 101 Freeway in Santa Rosa, igniting structures west of the freeway. Another fire in the county - dubbed the Potter Fire - has burned 1,500 acres.

Mandatory evacuations were in place for multiple areas in Napa County, where at least two other blazes on top of the Tubbs Fire are burning. The Atlas Fire is at 5,000 acres and the Patrick fire is at 100 acres.

Windy and dry conditions were making it difficult for firefighters to battle the blaze. Wind was gusting in the areas up to 50 mph.

With so many fires, residents of Sonoma County struggled to figure out what roads to take, finding downed trees or flames blocking some routes. One of the blazes in Sonoma County was at 300 acres and has been dubbed the Nuns Fire.

Fires also burned just to the east in the Napa County wine country as well as in Yuba, Butte and Nevada counties - all north of the state capital. Cal Fire tweeted that as many as 8,000 homes were threatened in Nevada County, which lies on the western slope of the Sierra Nevada.

Calls are overwhelming our 911 center due to Napa Co. 🔥 & winds are pushing smoke into Marin. Please call 911 only if you see 🔥 near your 🏘

The Marin County Sheriff's Department tweeted that they were being overwhelmed about calls due to the smoke.

Smoke from the fires spread throughout the Bay Area. One Twitter user reported that her building was evacuated after a resident pulled the fire alarm due to the smell.

Building was evacuated in #SF because we can smell the #napafire from here and someone pulled the alarm. Stay safe, everyone.

The San Mateo County Sheriff's Department issued a notice to residents to expect a strong smell of smoke from the fires.

The National Weather Service said widespread wind gusts between 35 mph and 50 mph were observed in the north San Francisco Bay region and isolated spots hit 70 mph. The winds were expected to subside at midday.

Community centers, the Sonoma County Fairgrounds and other local centers were opened for evacuees.