KABC
By Brandi Hitt
SANTA ROSA, Calif. (KABC) -- Seventeen separate wildfires continue to forge a deadly path across Northern California, where 17 people have died and more than 2,000 structures have been destroyed.

Entire communities are now gone in Northern California due to the onslaught of wildfires, which are burning over a 200-mile region. Taken as a group, the fires are already among the deadliest in California history.


The Sonoma County Sheriff's Office announced two additional deaths there late Tuesday. That brings the county's total to 11. The other six are spread among Napa, Yuba and Mendocino counties.

Families are searching feverishly for missing loved ones who may be lost in the rubble. As of Tuesday morning, approximately 100 people were still unaccounted for.

A lack of cellphone service across wine country is making the search even harder.

Overnight video from the area shows people running from the fire. Some roads in the area were almost impassable with flames towering on both sides.

The relentless wildfires have already charred at least 2,000 homes and businesses. Some of the largest of the blazes were in Napa and Sonoma counties, home to dozens of wineries that attract tourists from around the world.

The fires sent smoke as far south as San Francisco, about 60 miles away.

The California Highway Patrol's Golden Gate Division released a jarring photo taken of Santa Rosa, which was completely leveled by the flames.

The California Highway Patrol's Golden Gate Division released a jarring photo taken of Santa Rosa, which was completely leveled by the flames.

The city is home to 175,000 residents, including both the wine-country wealthy and the working class.

The flames were unforgiving to both groups. Hundreds of homes of all sizes were leveled by flames so hot they melted the glass off of cars and turned aluminum wheels into liquid.

October has generally been the most destructive time of year for California wildfires. What was unusual Sunday, however, was to have so many fires take off at the same time.

Other than the windy conditions that helped drive them all, there was no known connection between the fires, and no cause has been released for any of them.

But the conditions early Tuesday were calmer than they were the day before, bringing hopes of progress against the flames.

In Washington, President Donald Trump said he spoke with Gov. Jerry Brown to "let him know that the federal government will stand with the people of California. And we will be there for you in this time of terrible tragedy and need."

To the south in Orange County, more than 5,000 homes were evacuated because of a fire in the Anaheim Hills area. The blaze had grown to nearly 10 square miles and had destroyed 14 structures. 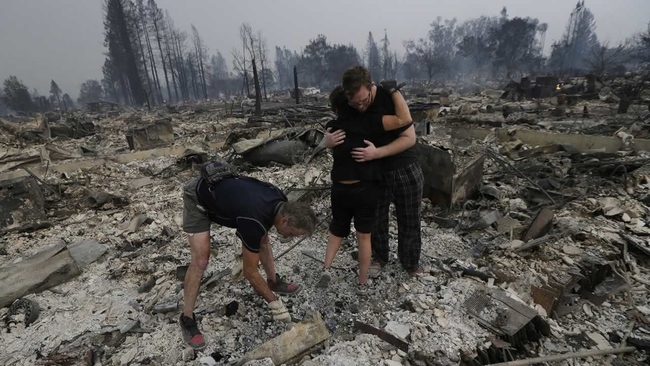