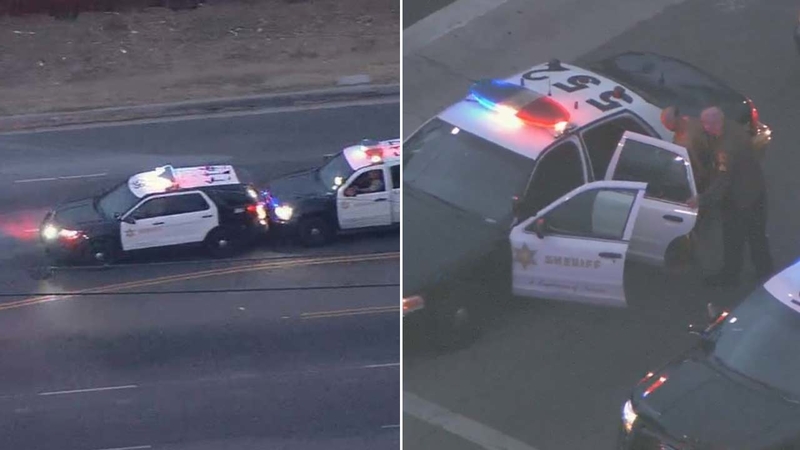 Driver of stolen sheriff's SUV in custody after dramatic chase

GRANADA HILLS, Calif. (KABC) -- The driver of a stolen sheriff's vehicle was taken into custody Tuesday morning after a dramatic chase marked by a deputy-involved shooting and high speeds in the San Fernando Valley.

The chase began about 6:45 a.m. when a Los Angeles County Sheriff's Department SUV was stolen by a patient at Olive View-UCLA Medical Center in Sylmar, authorities said.

"Safety is paramount," said Deputy Juanita Navarro-Suarez, an LASD spokeswoman, describing the incident at the hospital. A deputy "immediately sees a threat, he runs out of his vehicle and in doing so the suspect enters his vehicle and takes off," she said.

The cruiser made its way onto the 14 Freeway before continuing on surface streets -- and sidewalks -- in Granada Hills.

At one point the driver stopped in the middle of a street, backed up and rammed into a law enforcement vehicle involved in the pursuit. A deputy's gunfire then shattered the driver's-side rear window of the stolen SUV.

The chase ended about 7:15 a.m. when the shirtless driver exited the sheriff's vehicle near the intersection of White Oak Avenue and Kittridge Street in Reseda. He surrendered without incident.

The unidentified suspect was in fair condition after being injured during the pursuit, said Navarro-Suarez. It was unclear if he was struck by gunfire.