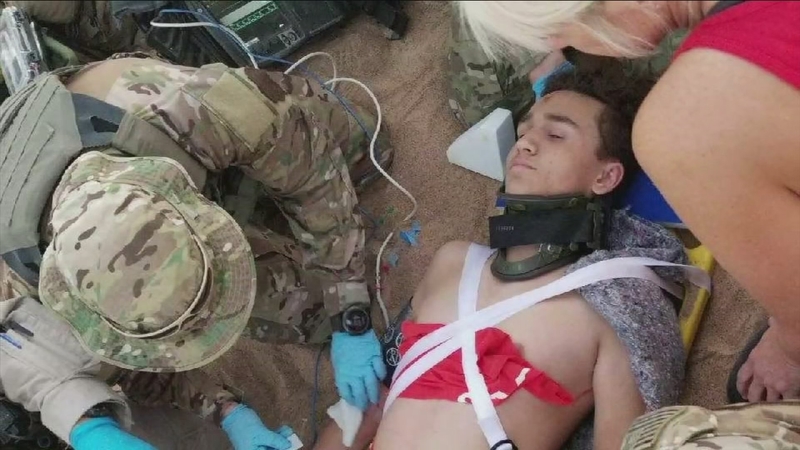 LOMA LINDA, Calif. (KABC) -- A teenager is struggling to recover from severe injuries he suffered after being hit by a dune buggy as the driver remains on the loose.

Jake Cabral, 15, of Santee, spent the weekend on his dirt bike on the sand dunes in Imperial County with his family, which he's done almost every Thanksgiving.

But this year, the trip ended with him airlifted to Loma Linda University Medical Center with serious injuries after being hit by the dune buggy.

"I just remember screaming in pain. Then just having tears run down my face," Jake said. "I didn't see how I hit it, or where I hit it, or where it hit me, but I just turned back and then I blinked. Next thing I know, my eyes are closed and I'm flying through the air."

While several people stopped to help Jake, witnesses said the driver of the dune buggy, a woman, fled the scene.

Nicole Cabral is Jake's older sister. She said he has seven fractures in his lower spine, two in his pelvis, four broken ribs and a lacerated spleen.

"There's a point in every day where you break down crying," Nicole said.

A photo taken on the day he was hurt shows the dune buggy that was left abandoned.

"It was left at the scene and now impounded and it was not registered," Nicole said.

Jake said the Bureau of Land Management is investigating the hit-and-run. No one has been arrested, but Nicole and Jake have a message for that driver.

"Please come forward. This has been a rough time," Jake said.

Nicole said she hopes the woman sees the pain her brother is going through.

"It's just really hard," she said.